Loki had its season finale premiere, and it was packed with a bunch of answers to the questions we had going into this episode. The finale saw Loki and Sylvie go into the void behind Alioth where they finally learn who is actually behind the Time Variance Authority (TVA). 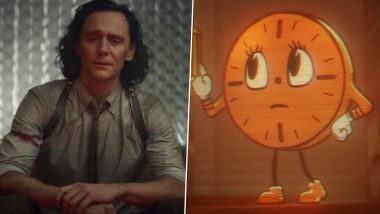 Loki had its season finale premiere, and it was packed with a bunch of answers to the questions we had going into this episode. The finale saw Loki and Sylvie go into the void behind Alioth where they finally learn who is actually behind the Time Variance Authority (TVA). It was an episode that delivered on all the thrills and revelations that you have come to expect from Loki. Loki: Saptrishi Ghosh on Voicing Tom Hiddleston’s Voice for the Disney+ Hotstar Series in the Hindi Version.

The season finale set up the next few years of the Marvel Cinematic Universe (MCU) going forward and has us excited for what’s next to come. It didn’t seem like Kevin Feige was lying when he said that Loki will have a major impact on the future of MCU. So with that being said let's dive into the meat of the matter where we discuss the eight plot twists from the season finale of Loki.

Miss Minutes Knew All Along

Throughout the start of the season, fans had been speculating that there is more to Miss Minutes than just being a mascot for the TVA. They finally got their answer when it was revealed that Miss Minutes actually was working for He Who Remains all along. She offers Loki and Sylvie a bargain at the behest of He Who Remains, and that tells us all we need to know about her. Loki Episode 6: Sonakshi Sinha's Swag Saha Nahi Jaye Song Finds A Place In Season Finale Of Tom Hiddleston's MCU Series.

We got our answer to who actually was behind the TVA. After a bunch of fan theories and speculation, it was such a vindicating moment to see Jonathan Majors show up as a version of Kang. While he is not directly name-dropped in the episode, it was great to see Majors embrace this role after his casting confirmation last year. It also confirmed my theory from last week where I speculated that it is actually Kang who is behind the TVA. With a variant of Kang actually being behind the TVA, it didn’t come off as a much of a surprise. He basically knew each and everything that was going to happen, and it was fun to watch him react to all those things happening. Loki: Is Kang the Conqueror the Big Baddie Behind TVA's Existence? Explaining The Fan Theory That's Going Viral!

Kang goes on to explain how he is a variant who hails from 31st century Earth. He then explains about how all of his Variants met up to regulate a proper timeline, but a power struggle broke out and a war started. This is our first hint towards a Multiverse in the MCU, and can potentially set up future projects.

In an attempt to make the TVA minutemen aware about what is going on, Hunter B-15 leads them to an office. It is over there that we get to know that Ravonna was a teacher in her original life from 2018, Ohio. This helps convince the Minutemen that they are all Variants.

Offering Loki And Sylvie a Choice

While Sylvie is there to kill Kang, he offers both Loki and Sylvie a choice. They could maybe take his place and control the timelines, or they could kill him off and start a multiversal war between all the Kangs. This leads to a confrontation between Loki and Sylvie because their viewpoints clash with each other. It leads to a brief skirmish among both of them where they finally kiss, but determined to complete her mission, Sylvie sends Loki back to the TVA headquarters.

After sending Loki back to the TVA headquarters, Sylvie takes her blade and stabs Kang, which results in his death. This opens up various branches in different timelines which commences the start of a multiversal war.

After being sent back to the TVA headquarters, Loki quickly goes to find Mobius. After finding Mobius, Loki tells him that a huge mistake has been made and the timeline is in danger. But Mobius just asks Loki who he is, hinting that this might be a different version of TVA. We quickly then pan towards a statue of Kang as the screen goes black and the credits start rolling.

There is no mid-credit scene, but mere a tease that Loki will return in season 2. And Yes, we are waiting for that!

(The above story first appeared on LatestLY on Jul 14, 2021 03:11 PM IST. For more news and updates on politics, world, sports, entertainment and lifestyle, log on to our website latestly.com).