Whatever the case may be, it does look like we will be getting our answer next week behind the individual running the TVA. The final episode of Loki will stream next Wednesday on Disney+ Hotstar at 12:30pm. 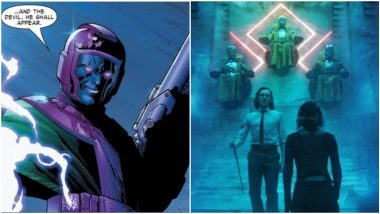 Loki just had its penultimate episode end on a cliffhanger which saw Loki and Sylvie defeating Alioth and going towards a castle which might be the residence of the person behind TVA. The entire show up till now has been building towards the reveal of this mysterious character. After the previous episode showed us that the Time Keepers were just an elaborate lie, fans ever since then have been wondering who might have been controlling the sacred timeline the. Well if what I believe the show is referencing towards, then it seems like Kang the Conqueror might be the big bad of Loki after all. Loki Episode 5 Recap: From Throg to Thanos Copter, Explaining the 10 Easter Eggs Marvel Fans Discovered in Tom Hiddleston’s Series.

Jonathan Majors was revealed to be playing Kang the Conqueror in Ant-Man and The Wasp: Quantumania, and just after the news dropped, a reliable leaker by the name of Charles Murphy stated that Kang will first appear in Loki.

Kang the Conqueror also goes by the name of Nathaniel Richards, and if you think the last name sounds familiar, then you’re right because it is. Nathaniel Richards is a descendant of Reed Richards, who takes on the mantle of Kang as he has the ability to hop through times. It seems like Loki may be building towards a grand reveal of Kang next week and episode five contained a lot of references to him.

The first reference could easily be the inclusion of Alioth. Alioth in the comics is an emperor who is accidentally released by Ravonna Renslayer. He then tries to usurp Kang’s empire but ultimately succumbs to him. The inclusion of him could definitely be hinting towards Kang.

ITS QENG ENTERPRISES NOT AVENGERS TOWER!!!!

Owned by Nathaniel Richards AKA Kang The Conqueror!!!!! pic.twitter.com/ZrLi0vGNvT

The second reference is that there is a shot of a destroyed Avengers tower where the pruned are sent. Although there is something a bit different about this version of the Avengers tower. Instead of the iconic A, it has Queng written on it. In the comic Ultron Forever, the Avengers tower is brought by Queng Industries from Stark Industries. Who is the owner of Queng Industries you may ask? Well its Nathaniel Richards. This could easily mean that Kang has some hand behind the existence of TVA. Loki Episode 5 Ending Explained: Decoding the Major Character Death and the Final Reveal in the Trippiest Outing of Tom Hiddleston’s Marvel Series.

Just after Alioth is defeated too, we see a castle in the distance. Now that castle can be hinting towards Immortus too, who, hold onto your seats, is Kang as well. From the Marvels character page “Deep in Earth’s future, the time-traveling conqueror Kang came to find his excursions into time left him unfulfilled, and he decided to give up worldly conquests and meditate on the nature of time until the end of his days. Thus, he journeyed to Limbo, a dimension that exists outside the timestream itself and built a castle, lording over the wanders of Limbo, the Space Phantoms.”

Limbo could very well be the place where the Pruned individuals are sent, since its revealed that TVA just sends anything over there that’s junk because it doesn’t affect the timeline in any way.

Whatever the case may be, it does look like we will be getting our answer next week behind the individual running the TVA. The final episode of Loki will stream next Wednesday on Disney+ Hotstar at 12:30pm.

(The above story first appeared on LatestLY on Jul 07, 2021 10:20 PM IST. For more news and updates on politics, world, sports, entertainment and lifestyle, log on to our website latestly.com).