Marvel’s What if…? Episode 7 Ending Explained: Who Is the Villain That Shocked Thor and the Watcher at the End? (SPOILER ALERT)

What If...?'s seventh episode sees Thor and gang reach Earth to have the biggest and the craziest party the planet has seen. It brings back popular Marvel characters like Jane Foster, Loki, Maria Hill, Odin among others. 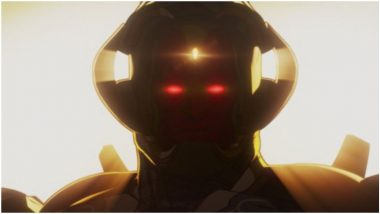 Explained! The Villain's Identity Who Arrived at the End Marvel’s What if…? Episode 7! (Photo Credit: Twitter)

The episode 7 of Marvel's What If...? series is the show's funniest, most light-hearted episode, also part romcom, part comedy and part superhero shenanigans. Thor and Jane Foster make their debut in the series, with other important Marvel characters like Captain Marvel, Nick Fury, Howard the Duck, and even Loki, now as a Frost Giant! Who knew Party Thor was such a blast! What if…? Episode 7 Review: Party Thor and Flirty Jane Foster Bring the Fun-Nest Episode of the Series!

The episode was not without action, as there were a couple of fight sequences between Thor and Captain Marvel, but not with any serious ramifications. Ever Surtur was chilling with Statue of Liberty, while Loki and Thor turned out to be BFFs when they aren't step-siblings! The episode also brought Thor and Jane Foster as a couple once again, with the characters displaying the kind of fun chemistry that we didn't get to enjoy in the previous movies.

Everything was going honk-dory till the end, as a now humbled Thor, who turned out to be quite a mama's boy, asks Jane out on a date, and walks away with a new spring in his step. Even The Watcher is content with their story, as he keeps on saying about love blossoming. But true to the tradition of What If...? episodes, there comes a shocking twist in the end, when a portal opens up and out comes an army of androids with a powerful being as their leader, and who seems to possess all the Infinity Stones. This entry leaves both Thor and even The Watcher shocked!

Who is the new Villain?

Let's cut the chase short. That villain, if he is one, is none other that Ultron-Vision. Remember in Avengers: Age of Ultron, Ultron tried to transfer his consciousness into a new hybrid body made out of vibranium and places the Mind stone in its head, and how the Avengers turned spoilsport in his plans? That android later became Vision, after Stark and Bruce Banner transferred JARVIS's AI into it, and Thor gave the power to bring it alive.

Well, now it looks like Ultron somehow came into existence in another universe (What did you do, Stark?) and he managed to go ahead with its plan of transferring his AI into Vision, thus becoming a powerful super-being, and beating Thanos in getting all Infinity Stones for himself, and becoming Infinity Ultron.

Which also makes us curious as to whom did Vision sacrifice to get the Soul Stone from Vormir? Did Iron Man die once again for that to happen?

Why is the Watcher Surprised?

Nearly every episode of What If...? ends in a shocking twist, from the end of a universe in the Doctor Strange-centric one to the revelation of Thanos Zombie in the Marvel Zombies episode. Here, Ultron-Vision's arrival not only shocked Thor and the viewer but also The Watcher, who is supposed to be all-watching. How did that happen?

From hereon, we might have to get into some serious conjecture, based on what we have known and seen in Marvel lore till now. If you are not aware, there is a Vision-Ultron episode coming up in the ninth episode of What If...?. So we might learn how he came into existence. What If…? Episode 7 Recap: From Party Thor to Captain Marvel, 11 Plot Twists from Latest Episode of Marvel's Disney+ Animated Series.

Now we are guessing that this Ultron-Vision has become so strong with his vast knowledge and with the possession of all the Infinity Stones, that he has now learnt to travel between the multiverses! The Watcher might be the only person aware of the existence of the multiverses, yet he might not have seen anyone travelling between two, which is why he was left shocked by Infinity Ultron's arrival in what was supposed to be the happiest universe.

Do you agree with our theory on the new episode of What If...? Share your thoughts in the comments section below.

(The above story first appeared on LatestLY on Sep 22, 2021 07:00 PM IST. For more news and updates on politics, world, sports, entertainment and lifestyle, log on to our website latestly.com).