What If…? Episode 7 Recap: From Party Thor to Captain Marvel, 11 Plot Twists from Latest Episode of Marvel's Disney+ Animated Series

What If…? Episode 7 included some really fun cameos from certain Marvel characters and was just a joy to watch. Marvel Studios What If…? Streams every Wednesday on Disney+ Hotstar at 12:30 pm. 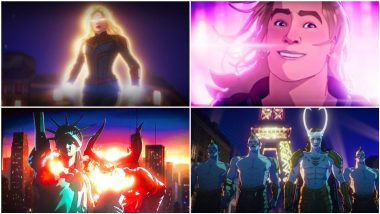 What if…? had its seventh episode premiere and after a bunch of depressing episodes, this was a fun-filled romp. It featured Thor, our God of Thunder rage one of the biggest parties across Midgard, the likes of which had never been seen. The episode included some really fun cameos from certain Marvel characters and was just a joy to watch. What if…? Episode 7 Review: Party Thor and Flirty Jane Foster Bring the Fun-Nest Episode of the Series! (LatestLY Exclusive).

With everything fun going on in episode seven of Marvel’s What if…? Let's take a look at all the plot twists from the latest episode.

The episode begins with Jane Foster and Darcy in their van looking for extra-terrestrial activity thinking an invasion is coming. They are soon greeted by a portal that drops down in Las Vegas. Through it, Thor and the Warrior Three walk. Marvel’s What If…? Episode 6 Recap: From Killmonger Saving Tony Stark to a Wakandan, 10 Plot Twists That Happened in Disney+ Animated Series.

Its then revealed that Thor is there to rage a party in Midgard the likes of which have never been seen. They start by turning Las Vegas into a party hotspot.

Thor is an Only Child

Its revealed the Nexus event for this episode was that after the battle with Frost Giants, Odin gives Loki back to them resulting in peace. Thor then becomes Odin’s only child and has aspirations larger than just being a king.

Jane and Darcy end up joining the party then in search of who lead the aliens to Earth. Jane finds out that it's Thor and he convinces her to take part in the party. From there a montage starts out with a bunch of weird things happening in it, the weirdest being Darcy marrying Howard the Duck. Jane then wakes up in a room with Thor with Rocket Raccoon and many others present there.

A Meeting with SHIELD

After waking up Jane is called into the SHIELD headquarters where she meets Agent Maria Hill. Hill, being against Thor, sends for The Last Resort and beeps a pager with Captain Marvel’s logo on it.

Loki then joins the party all suited up in his Frost Giant form. It is revealed he and Thor are the best of friends and then Loki ends up joining his party.

Captain Marvel then arrives on Earth and battles it out with Thor. The fight is amazing as it goes from France to the United Kingdom to the USA. Thor ultimately is able to overpower Captain Marvel and tells everyone in his party to call her a party pooper.

Trying to Connect to Heimdall

Jane then gets an idea to call Heimdall as he would be able to lead her to Friga then. Jane is successful in doing so and Heimdall sends her off to Friga.

Captain Marvel then again dukes it out with Thor and she this time is able to get an upper hand against him. SHIELD then prepares to fire a nuke at them to end this for once and all but are interrupted by Friga. Friga tells them that she will be visiting Earth to make sure that Thor isn’t causing any mess and then SHIELD stands down.

A Cleanup for the Ages

Thor then quickly with his Entourage starts a worldwide cleanup of the mess he has made. After being successful in doing so he is able to trick Friga into tricking that he was on Earth for a study retreat. But she then realises that Thor indeed was partying after Mjolnir comes back in a messy condition. Luckily Thor doesn’t face any big consequences. He is then asked out on a date by Jane Foster.

A portal then shows up through which a bunch of Ultron bots come out. They are led by Vision with an Ultron armor on him decked out with all the Infinity Stones.

Marvel Studios What If…? Streams every Wednesday on Disney+ Hotstar at 12:30 pm.

(The above story first appeared on LatestLY on Sep 22, 2021 05:27 PM IST. For more news and updates on politics, world, sports, entertainment and lifestyle, log on to our website latestly.com).