What if…? Episode 7 Review: Party Thor and Flirty Jane Foster Bring the Fun-Nest Episode of the Series! (LatestLY Exclusive)

What If...?'s seventh episode sees Thor and gang reach Earth to have the biggest and the craziest party the planet has seen. It brings back popular Marvel characters like Jane Foster, Loki, Maria Hill, Odin among others. 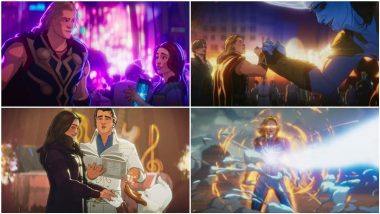 What If...? Episode 7 Review: After some very dark episodes, including one with zombies and several that kept killing Tony Stark, Marvel's What If...? has decided to take a chill pill, and came up with what is the series' funniest episode to date, where the only person harmed happened to be Nick Fury (Samuel L Jackson) accidentally rendered unconscious by a careless Korg (Taika Waititi). And it is also the episode where more than Korg, it is Waititi's Surtur who happened to be a bigger scene-stealer! Marvel’s What If…? Episode 6 Recap: From Killmonger Saving Tony Stark to a Wakandan, 10 Plot Twists That Happened in Disney+ Animated Series.

The new What If...? episode finally brings Thor (Chris Hemsworth) into the mix, where in this universe, he happens to be the only child of Odin and Frigga. With Odin having not adopted Loki (Tom Hiddleston), who grew up instead with his real family - the Ice Giants of Jotunheim, Thor had no one to check on. And that turned him into a party monster!

When Odin goes to Odinsleep and Frigga goes to visit her sisters, the kids got to play. So Thor and his friends go to Midgard aka Earth to have a huge party gala, and they bring the rest of their intergalactic being, including Drax, Nebula, Loki (now a Frost giant), and even Howard the Duck!

On Earth. Jane Foster (Natalie Portman) and her intern Darcy Lewis (Kat Dennings) were expecting an alien invasion. so they are shocked to see a hulky, good looking God leading others to have fun! Of course, sparks fly between Jane and Thor, because they are always destined to be together!

However, Thor and his 'alien' friends' antics don't go down well with SHIELD's acting director Maria Hill (Cobie Smulder), who bring in their biggest, and last, resort Captain Marvel to tackle this menace. Ok, then why did SHIELD not bring her during the events of The Avengers?

What If... Thor was an Only Child? Discover the answer in a new episode of Marvel Studios' #WhatIf, streaming tomorrow on @DisneyPlus. pic.twitter.com/3x0iIfARUe

Like I said before, Episode 7 is easily the funniest episode of the whole series, in line with the vibe of Thor: Ragnarok. It is fun to see most of the characters we know let their hair down and have fun, even if it means Earth sees the ramifications of their damage. How can you not laugh when Thor mishears Jane and says, "I do not know any horse gods!" Or Surtur flirting with Statue of Liberty and end up burning her arm off. Or Howard and Darcy hooking up in LA, and thankfully avoiding the creepy sexual overtones of Howard the Duck movie! What if…? Episode 5 Review: Marvel Meets the Walking Dead for Some Grisly Zombie Thrills in Disney+ Series’ Latest Outing.

The episode also showcases the most breezy chemistry between Thor and Jane, something the previous two movies couldn't conjure, and I hopefully would get to see more in the upcoming Thor: Love and Thunder. And after Avengers: Endgame, in case you are wondering who is stronger - Captain Marvel or Thor - well, let the episode answer that for you!

One thing I was a little unhappy about What If...? was that the voice-acting was not exactly the level I expected, it was more of a mixed bag, getting better in the further episodes. Episode 7 is a bright spot, with Hemsworth, Portman, Hiddleston, Dennings et al as all seems to have a blast here! Even Frank Grillo's Rumlow has a funny moment towards the end of the episode!

All in all, What If...?'s seventh episode comes across as one of the better ones, with an intriguing ending sequence, and a whole lot of laughs! What If...? is streaming on Disney+ Hotstar, with new episodes dropping every Wednesday.

(The above story first appeared on LatestLY on Sep 22, 2021 03:25 PM IST. For more news and updates on politics, world, sports, entertainment and lifestyle, log on to our website latestly.com).

Comments
Tags:
Chris Hemsworth Loki Marvel Marvel's What If? Natalie Portman Thor Tom Hiddleston What If Episode 7 Review What If? What If? Cast What If? Review What If...? Episode 7
Comments
You might also like