Scam 1992 is currently the highest-rated IMDb show in the world and have surpassed the ratings of Bryan Cranston's Breaking Bad (9.5) and award-winning mini-series Chernobyl (9.4). 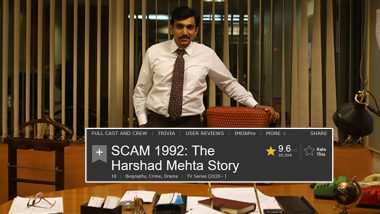 New Sony Liv web show Scam 1992 that is based on the life of Harshad Mehta has been in buzz days after its release. A story about Harshad Mehta a con man who was known as the king of the Dalal street. Interestingly, the Hansal Mehta show is currently the highest-rated IMDb show in the world and have surpassed the ratings of Bryan Cranston's Breaking Bad (9.5) and award-winning mini-series Chernobyl (9.4). However, Scam 1992 has achieved the milestone with just 24k votes whereas Breaking Bad has a super healthy meta score with 14 lakh plus and Chernobyl getting 5 lakh plus votes. No Indian show has come close to that ever. Scam 1992 Review: Pratik Gandhi Towers Tall in Hansal Mehta’s Meticulous Retelling of the Harshad Mehta Story

However, Barun Sobti and Arshad Warsi's Voot Select show Asur touched the 9.1 IMDb mark in the first few days and now it stands at 8.4. Scam 1992 revolves around the stock market crash of 1992 in India. The series is based on the life of infamous stockbroker Harshad Mehta and is getting raving reviews from the critics and the viewers overall. Pouring final thoughts on Hansal Mehta's web show, Sreeju Sudhakaran of LatestLY wrote "Scam 1992 does a fine job in retelling one of the biggest scams of the '90s, without dehumanising its subject. Hansal Mehta's deft direction, Gandhi's fantastic performance and quote-worthy quips make this Harshad Mehta story winsome enough." Scam 1992: From Playing a Gay Man to Being Harshad Mehta, All You Need to Know About Pratik Gandhi Who Is Earning Rave Reviews for Hansal Mehta’s Web-Series!

Pratik Gandhi plays the lead role of Harshad Mehta in the Sony Liv show and the actor impressed everyone with his notable performance. It also stars Hemant Kher Anjali Barot, Jai Upadhyay, Faisal Rashid, Satish Kaushik, Maheshwari, Kavin Dave and Mithilesh Chaturvedi among others. SCAM 1992: The Harshad Mehta Story is streaming on Sony LIV and it's interesting to what is the IMDb rating of the show in next few days.

(The above story first appeared on LatestLY on Oct 23, 2020 06:55 PM IST. For more news and updates on politics, world, sports, entertainment and lifestyle, log on to our website latestly.com).