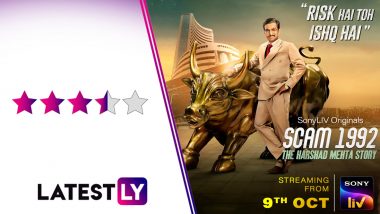 Scam 1992 Review: Can't help but wonder at the irony that Harshad Mehta, who is nicknamed 'The Bull of Dalal Street', saw his downfall by a journalist, whose surname is 'Dalal'! Hansal Mehta's web-series, Scam 1992, is based on the rise and fall of the stockbroker who was accused of doing financial fraud of Rs 500 crore or perhaps more. The series is based on journalist Sucheta Dalal and Debashish Basu's book The Scam: Who Won, Who Lost, Who Got Away. Scam 1992 Trailer: Hansal Mehta’s Web Series Based On Indian Stockbroker Harshad Mehta To Premiere On SonyLIV On October 9.

Dalal, played by Shreya Dhanwanthary, is the journo who wrote the investigative piece for Times of India, that turned out to be the first nail in the downfall of Mehta, played by Pratik Gandhi. She also serves as the occasional narrator, chronicling how a man from a lower middle-class locality in Mumbai soon became the Big Bull of the city.

Hansal and his writers, Sumit Purohit, Vaibhav Vishal and Karan Vyas, had put immense research in the script, and it reflects well in the series. Being a stock-market virgin, some of the terms the characters drop every now and down, bounced over my head. But the writers keep it as simplistic as possible, while peppering the narrative with some fantastic dialogues. At the same time, it doesn't gloss over the details of what Harshad Mehta has been accused of, even if some of the crimes are beyond your reasoning.

I was also fascinated with how they brought out the character of Mehta. To the world, he is a villain. But in the first couple of episodes, you end up rooting for this man to rise up from his adversities. Hansal Mehta humanises his protagonist to making his aspirations relatable to anyone striving in similar circumstances, before his ambitions grow beyond our moral reasoning. The depiction of his family life gets skewered in the process, but you are not watching to series to know how good a husband Harshad Mehta was, right? Though, he is still shown to be a good family man here.

I don't know how close Pratik's portrayal of Mehta is to the real man, who passed away in 2001. The Harshad we meet in the series has this charming personality and a silver tongue, whose rousing speeches can easily floor anyone. He comes across less of a two-dimensional villain, and more an anti-hero, a genius who knows all the rules of his games, and makes his shrewd plays through the loopholes he discovers. These 'plays' are unacceptable as per RBI rule-book, but Harshad sees them as unconventional tactics.

The first two or three episodes or so, I had this feeling that Hansal was being enamoured by his surname-sake, just like the rest of brokers of Dalal Street. But then Scam 1992 goes the Breaking Bad way. It may not turn Mehta into a Walter White, but it brings other supporting players to show how vast Mehta's scams were, with Sucheta Dalal getting a bigger role to play in the second half.

Here's where the the real troubles begin for the series, just like for Harshad Mehta. As long as Scam 1992 followed Harshad's journey, it was an arresting watch. But as soon as the focus shuffles between him and the rest of the characters, including Sucheta Dalal, the pacing slackens and the screenplay loses some of its punch. Though the detailing is quite great!

Still, Hansal Mehta does his best to keep the story as engaging as possible, even if we know the end. A special note of credit for the production team in creating the Mumbai of '80s and '90s, within the constraints of the budget. Sure, I could deduct the green screen in a few scenes, but that is pretty forgivable.

Then there is the immensely talented Pratik Gandhi. A popular Gujarati actor, Pratik was quite the scene-stealer in his underrated Bollywood debut, Mitron. In Scam 1998, he relishes being in the centre of the spotlight, giving a disarmingly fantabulous performance. There is a immense believability when Pratik possesses Mehta's flair for rhetorics and cockiness, but without losing the the groundedness that give him the underdog quality.

Among the supporting cast, Shreya Dhanwanthary has more opportunity to shine in the second half of the series, and she delivers well in those portions. The veteran Satish Kaushik leaves a mark, as the foul-mouthed stockbroker Manu Manek. The rest of the cast, some of them popular Gujarati artistes, are highly believable and give fine performances.

- Some Strong Writing in the First Half

- Loses Some Focus in the Middle Portions

While I wish the second half of the series was tighter, still Scam 1992 does a fine job in retelling one of the biggest scams of the '90s, without dehumanising its subject. Hansal Mehta's deft direction, Gandhi's fantastic performance and quote-worthy quips make this Harshad Mehta story winsome enough. Scam 1992: The Harshad Mehta Story is streaming on SonyLIV.

(The above story first appeared on LatestLY on Oct 09, 2020 09:39 PM IST. For more news and updates on politics, world, sports, entertainment and lifestyle, log on to our website latestly.com).