Here, check out what critics have to say about the latest fantasy series on Netflix titled Shadow and Bone. Mostly, the reviews are positives. Read on. 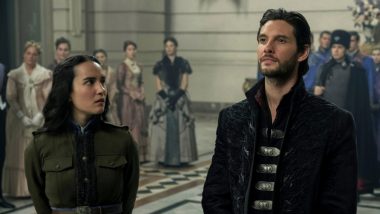 Amid the rising case of coronavirus all over the globe and especially in India, 'Netflix and chill' concept is definitely the right thing to do right now. The OTT platforms are booming, as many yay and nay films/series are getting released online. Talking on the same lines, let's talk about Shadow and Bone, the new Netflix fantasy series that everyone is talking about. This one has in total eight episodes, each of almost an hour. So, should you binge-watch this show or not? Well, we are about to tell you that. Searching For Sheela Review: Critics Shocked At Karan Johar's Shallow Approach To The Documentary And Lack Of A Director's Name In The Credits.

Well, as per the early reviews, the dark series has garnered mostly positive reviews from the critics. While some have called it the best show on Netflix, there are also a few reviewers who've compared it to Game of Thrones. In case, you are about to spend your eight hours and watch Shadow and Bone, we would say, check out what critics have to say about it first. Mortal Kombat Review: Critics Believe This Movie Adaptation Of A Hit Video Game Is Strictly For Gore Lovers.

CNET pens, "Adapting Shadow and Bone from Leigh Bardugo's Grishaverse series, plus throwing in characters from another of the series in Six of Crows, the show packs so much into its eight episodes that, for once, runtimes aren't bloated enough. Still, with endearing characters, brought to life by a large, inclusive cast, Shadow and Bone is a sure-fire hit. Admirably ambitious, even if its moving parts don't totally come together."

"Still, Shadow and Bone does mostly manage to pull it all together in the end, and the mythical stag is very shiny and nice-looking. That might be enough to make it a fun, diverting series, especially among fans of the books or anyone looking for something with a lot of fur-trimmed clothing and hand-waving magic. Just give your eyes time to adjust to the gloom," writes Vulture. Avengers: Endgame Movie Review – Critics Call the Superhero Movie a Love Letter to Fans of MCU.

The Guardian adds, "Perfectly competent, enjoyable stuff. But, like The Witcher and the other contenders for the Thrones’ crown that there have been since, it doesn’t – or can’t, whether for merely budgetary or more creative constraints – build on what has gone before. We sup still on thin gruel."

"Everything from the costumes to the special effects just screams money in ways that other fantasies haven't for a while now. It seems then that Netflix held some coins back and tossed them to Shadow and Bone, as well as The Witcher's upcoming season," Digital Spy mentions.

Decider calls it Netflix's GoT, "Netflix’s Shadow and Bone is about as miraculous as its leading lady, Alina Starkhov (Jessie Mei Li), is herself. It’s a brilliant adaptation of Leigh Bardugo’s bestselling Grishaverse books that feels as dense as Game of Thrones and as thrilling as your favorite CW show. It also hits Netflix at a time when TV fans are clamoring for their next binge-worthy obsession."

Seems like the reviews are mostly positive and so there is no harm if you spend time watching Shadow and Bone. The series stars Jessie Mei Li, Ben Barnes, Freddy Carter, and others. The show dropped on Netflix on April 23. Stay tuned!

(The above story first appeared on LatestLY on Apr 23, 2021 02:41 PM IST. For more news and updates on politics, world, sports, entertainment and lifestyle, log on to our website latestly.com).