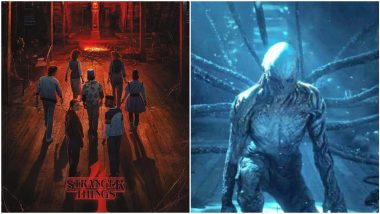 After a gap of couple of years, The Duffer Bros have brought back everyone's favourite sci-fi show, Stranger Things, for its penultimate season on May 27. The fourth season of Stranger Things is streaming on Netflix, dividing its run into two volumes, with first volume consisting of seven episodes, and the second volume, arriving on July 1 with two episodes. The length of each episodes has also been talking point among the fans, with some episodes being as long as a movie, and the finale episode about two and a half hours long! Stranger Things Season 4 Part 1 Review: This Is the ‘Avengers Infinity War’-Level Adventure for the Netflix Saga!

But despite the lengthy episodes, Stranger Things Season 4, short of the final two episodes, has been a fun ride, packed with enough thrills, adventures, twists and exploring more of the lore of the Upside Down. The new antagonist is Vecna, a hideous human-like figure who controls his victims from his domain through their traumatic minds, and as Dustin puts it up, is the general for the big bad, The Mind Flayer.

Like with the last season, the hero gang has been split up into various factions. Eleven, after being bullied at her new school and taking down one of her bullies in a disastrous manner, is now attempting to rediscover her past to where it all began. Mike, Will, Jonathan (Will and Jonathan have shifted to Fenora with their mother and Eleven after last season) and Jonathan's dopehead friend Argyle are on the run from the military who are seeking Eleven's whereabouts. Meanwhile Joyce Byers and Murray are out to save Chief Hopper from his Russian imprisonment, as they face lies, betrayals and demogorgons on their way.

As for the remaining gang back in Hawkins, Dustin, Nancy, Steve, Max, Robin and Lucas are out to stop Vecna and prove the innocence of Eddie, the Hellfire Club leader, against the murder accusations, while the entire town is baying for his blood. At the series proceeds, we also learn the tragic but horrifying tale of the Creel house a couple of decades back, where the patriarch was accused of killing his wife and daughter, but Nancy and the rest believe it to be the handiwork of Vecna.

Towards the end of the season, Eleven's flashback journey and the Hawkins' gang's discoveries combine to identify who is Vecna and what is his endgame. So in this special feature, we try to decode what this twist revelation means for the rest of the season. Needless to say, SPOILERS ahead!

The reason Vecna could communicate with his human victims in their mode of communication, unlike the other creatures in his world, is because he was a human. In a double twist revelation, Peter Ballard, the orderly who was helping out a young Eleven has been One, who has been hiding his powers all along, and he was responsible for the killing of the children and the other workers in the lab, and not Eleven, as otherwise denoted in the opening scene of the season.

Wait, there is another twist too. One had been the young son of Victor Creel, who had been possessing telepathic and other mind-control powers, and he was the one who was torturing his family, before killing two of them and then sending his father to prison for their deaths, and not some demon from the Upside Down. Dr Brenner uses One to harness his powers, and then to create more subjects like Eleven. One thought Eleven was much like him, bullied for being different, however, she didn't turn out to be killer like him, hence she declines to follow him seeing his murder spree.

Eleven Causes the First Break to Upside Down

As Dustin pointed out earlier, The Upside Down is a dimension that might have been existing for very long, maybe even in the times of the dinosaurs. But breaches to the real world is a very rare cause. The first time that happened in their knowledge is when Eleven caused it in season 1, and then the Russians caused another breach in season three. However, the Creel house incident was stupefying for the gang, until Nancy got mind-trapped in the Upside Down by Vecna, and realised that Peter has been responsible for the family's death. Stranger Things Season 4: Netflix Adds 'Content Warning' Ahead of Show's Premiere Following Texas School Shooting.

Meanwhile Eleven, while trying to save herself from being killed by Peter, somehow recollects the memory of her being born, and using Peter's earlier advice to her against him, uses this memory to overpower Peter and then banish him to the Upside Down, thus causing the first breach. Peters turns into Vecna in this dimension, while the breach allowed the Mind Flayer to send its minions to the real world.

While the seventh episode managed to answer some of the mysteries, our heroes are still in danger. Nancy is trapped in Upside Down with Vecna hounding after her, while Steve is with her comatose body in there. Unless the gang in the real world manages to pass on her favourite song down the breach,  Nancy is in real trouble. TBH though, we are more worried for Steve who might do the sacrificial play to save her, just like how Nancy, without flinching, dived after into the lake to rescue him when he was taken into the Upside Down. We worry for you, Steve.

Interestingly the other angle of this love triangle - Jonathan - was absent the entire episode, along with Will, Mike and Argyle. Having met Dustin's girlfriend Suzie and Argyle infatuated with her sister, the group just got bigger and we can probably expect them to meet the rest of their friends in the final two episodes.

Meanwhile, Dustin and gang would look at trying to save Nancy from the hell she is in, but we are betting they can only save either Nancy or Steve, and sadly, we think the owner of everyone's favourite transformation story is not gonna make it to the next season. Let's also not forget that Eddie might have climbed out of Upside Down but he is still not safe from the Hawkins' residents who are out for his blood, especially the boyfriend of the murdered cheerleader. Unless Vecna comes out in the open, he is doomed.

We might also bee looking at the military crashing at Brenner's lab in trying to capture Eleven. That won't happen because we are definitely going to see Eleven taking on Peter, now in Vecna form again, with her recently regained powers. The question to be asked is if Vecna is going to open more breaches with more victims for his boss to come in the real world, and why is he targeting teenagers this time.

Speaking of Brenner, well, the season hasn't answered how he survived the demogorgon attack in season 1, and why he has been hiding all this while.

Oh, we haven't forgotten about Hopper, Joyce, Murray and Dmitri back in Russia. While Hopper did get to reunite with Joyce and Murray, they still have to escape a containment facility filled with Russian guards, not to mention a demogorgon on the loose. While we don't believe that Hopper and Joyce would be in mortal danger, can't say the same for Murray and Dmitri.

So what do you think of Stranger Things Season 4 Vol 1? Do you believe in our predictions for Vol 2? Share your thoughts in the comments section below.

(The above story first appeared on LatestLY on May 27, 2022 04:47 PM IST. For more news and updates on politics, world, sports, entertainment and lifestyle, log on to our website latestly.com).