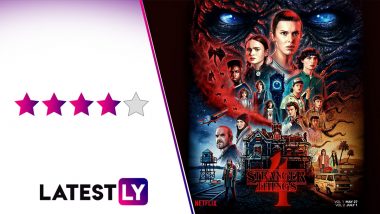 Stranger Things Season 4 Vol 1 Review: Yes, when you see the length of each episodes of Stranger Things Season 4, you might baulk at the runtime. But when you are having too much of a good time, then does 'Time' even matter? Created by the Duffer brothers (good thing they ain't living in India with that name) and with Free Guy director Shawn Levy directing several episodes. Stranger Things returns with its most ambitious penultimate season, after watching which you are bound to ask, 'To what extent will they go in the next and the final one'? Stranger Things 4: Review, Release Date, Time, Where to Watch – All You Need to Know About Millie Bobby Brown and Finn Wolfhard's Netflix Horror Series!

As seen the finale of season 3, after the apparent death of Chief Jim Hopper (David Harbour), Eleven (Millie Bobby Brown) - who has lost her powers - has been adopted by Joyce Byers (Winona Ryder) and has relocated away from Hawkins to Fenora, along with Will (Noah Schnapp) and Jonathan (Charlie Heaton). Eleven and Mike Wheeler (Finn Wolfhard) try the long distance relationship, but Eleven never tells him about the bullying she faces at school. Jonathan has begun a Cheech and Chong kinda bonding with his town's resident dopehead Argyle (Eduardo Franco)

Meanwhile, things ain't so rosy at Hawkins. Max (Sadie Sink) is still grieving about her dead half-brother and has broken up with Lucas (Caleb McLaughlin). Lucas, now in the basketball team, has also distanced himself from his friends, Mike and Dustin (Gaten Matarazzo) to become 'cool' being with the basketball stars. Mike and Dustin are part of a Hellfire Club - a type of D&D playing club - led by an infectious Eddie (Joseph Quinn) who also sells drugs on the side. Steve (Joe Keery) and Robin (Maya Hawke) are now working at video store, where they bond over old classics and their lack of love lives. Nancy Wheeler (Natalia Dyer) is now the editor of the high school newspaper and she is also troubled a bit by her long distance relationship with Jonathan.

While the relationships are seeing challenges of long distance and growing up, the Upside Down returns to spook the town's inhabitants, this time bringing a new villain - Vecna -  who haunts and torments teengers suffering from past trauma, and Max has now made it to his wishlist.

Oh wait. with so many arcs and new characters stuffed this season (and some old, forgotten ones returning), I almost forgot that Hopper is alive and is imprisoned and tortured in a Russian prison, from where he tries to seek Joyce's aid in his escape. Yup, there is way too much going on in the new season of Stranger Things, and at times, you do feel overstuffed especially in the middle portions, but never do you feel bored or lagging at any point. Stranger Things 4 Review: Critics Call Millie Bobby Brown and Finn Wolfhard's Upcoming Season the Best One Yet!

Like with the last season, Season 4 has also split up our band of heroes into their different adventures, some into investigating and ending the mysterious happenings, some merely saving their own skins, a couple into saving Hopper and Eleven trying to discover her forgotten past and re-discovering her powers. If that's not enough, Stranger Things also introduce religious over- zeal into the mix when the commanding captain of Lucas' basketball team, who loses his girlfriend to Vecna and suspects Eddie's hand in it, believes Hellfire Club is into Satanic rituals, as the victims rise.

However, despite the many, many subplots and arcs including a flashback that invokes Amityville-kinda curse and brings in the iconic Robert Englund for a memorable cameo, Stranger Things Season 4 Volume 1 is relentlessly engrossing and entertaining, with almost every storyline reeling in in. Only the first episode feels like a pause in action, the rest is just a transition from one riveting setpiece to another. Nearly every major characters gets to be involved in the action, and even the new characters Argyle, Peter and Eddie get to have their moments.

Slight disappointment - The OG scenestealer Erica is kept on the sidelines and only brought to the main events in the seventh episode. Even when the series chases after monsters or do haunted-house hunting, it stops and gives our favourite characters to pause and be for what they are. Like Max checking out Steve's shirtless form even when they are close to danger, or our fave conspiracy theorisMurray (Brett Gelman) showing off his karate chops in a very precarious situation. Of course, the movie influences are there, from Carrie to Nightmare on the Elm Street, but not too hammered like the last season. Also, Stranger Things continues to choose some fab musical choices in its soundtrack; Baltimore's "Tarzan Boy" played during a ice-skating scene reminds you of how Bollywood has sought after 'musical inspirations' from beyond borders even before the likes of Anu Malik and Pritam. Stranger Things 4: Duffer Brothers Reportedly Had a Meltdown After Monopoly Spoiled the Upcoming Season.

What's more striking is how the scale and the scope of the visuals have been amped up, nearly every scenery feels spectacular, from the reddish-black surrealness of the Upside World to the bleak snowscape of Russia. The creature design of Vecna and the haunting imagery he brings are just fantastic. Clearly this season of Stranger Things is a fine example of how very close television can get to big screen experience.

Stranger Things Season 4 Part 1 is the Netflix sci-fi show getting into its best, and also the most ambitious and stunning form to date. Even when it chases successfully after lofty ambitions and dazzling visuals, the series never lets go of what made it such a endearing cult show - likeable inter-character dynamics with geeky overtones. Stranger Things Season 4 Part 1 is streaming on Netflix from May 27.

(The above story first appeared on LatestLY on May 23, 2022 04:25 PM IST. For more news and updates on politics, world, sports, entertainment and lifestyle, log on to our website latestly.com).