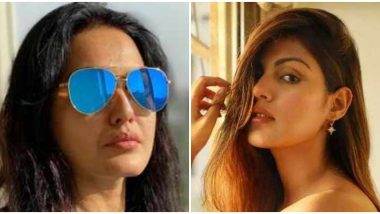 There has been a new turn in the Sushant Singh Rajput case. Last week, Rhea shared a picture of Sushant's sipper and a page from a diary which contained his gratitude list. Rhea also shared a series of WhatsApp chats between her and Sushant, which was presumed to be about his sister Priyanka's cold behaviour towards Rhea. However, that move has invited quite the ire from Sushant's fans and also from his TV friends. And actress Kamya Punjabi, who is known for calling a spade, a spade, lashed out at Rhea. Kamya Punjabi and Her Daughter Return to Mumbai Sporting Protective Gears, the Actress Says It's 'Work Calling' As Unlock Begins (View Pic).

Kamya, in her tweet lashed out at Rhea asking her what was she trying to prove by releasing such chats. In fact, after news of Rhea sharing Sushant's sipper's picture broke out, Kamya had tweeted, "Jiska sipper tha usse hi sambhal kar rakh leti....!!!! #SSRMurderCase #JusticeForSushant #Warriors4SSR." And once again, Kamya lashed out at Rhea. Kamya Punjabi Gives Us an Unseen Tour of Her Wedding Festivities and It’s Magical and How (View Pics).

What is she trying to prove with this? Bhai behen meh jhagde hote rehte hai koi badi baat nahi hai... n most imp he was staying with you n not his sister.. all the credit cards were used by you, not his sister!!! #chorkidaadhimehtinka #JusticeForSushantSinghRajput #rheakireality https://t.co/SYxEhd5gyH

Kamya also once again brought to everyone's notice with her tweet that Rhea has apparently used all of Sushant's credit cards and not his sisters. She also went on to say that siblings always fought and there was no need to make such a big deal of it. Kamya Panjabi and husband Shalabh Dang Look Dreamy In their Wedding Pictures, Check It Out!.

This incident comes to light after news of Rhea falsely accusing Sushant's sister Priyanka of molesting her was reported by Pinkvilla. The portal quoted Sushant's lawyer who revealed that Rhea had driven a wedge between Sushant and Priyanka by making false claims. He concluded by saying, "He (SSR) realised his mistake that in a short span of few days Rhea had played a mind game to separate two siblings who were inseparable and happened to be each other’s strongest emotional support."

(The above story first appeared on LatestLY on Aug 10, 2020 05:57 PM IST. For more news and updates on politics, world, sports, entertainment and lifestyle, log on to our website latestly.com).