Kamya Panjabi and husband Shalabh Dang Look Dreamy In their Wedding Pictures, Check It Out! 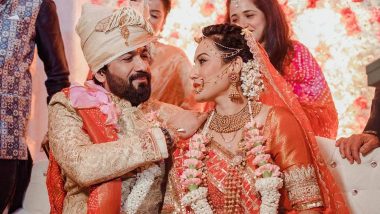 Popular television actress and former Bigg Boss contestant, Kamya Panjabi is now officially married! In a grand ceremony, the Shakti actress got hitched to her long time beau Shalabh Dang on February 10, 2020. Just like a typical Indian wedding, Kamya's shaadi also saw many rituals. Right from haldi, mehendi to sangeet, the actress kept posting all the deets from her pre-wedding festivities on Instagram. And well, here comes a few fresh pictures from Kamya and Shalabh's wedding day and must say the bride and the groom look gorgeous together. Panjabi took to IG and shared some beautiful moments from the D-day and you cannot miss them. Kamya Punjabi's Engagement To Shalabh Dang Proves Simplicity Is Precious (Watch Video).

In the photos, the bride is seen beaming with joy and it'll surely melt your heart. From saat pheres, kanyadan, maang mein sindoor moment to the bidaai, the pictures tell the shaadi tale beautifully. Coming to the bride and groom's wedding couture, Kamya can be seen wearing an orangish-red attire with heavy jewellery whereas the man can be seen in a cream embroidered sherwani. Pretty and how! Also, if you have noticed after tying the knot, Kamya also changed her name to 'Kamya Shalabh Dang' on social media. Aww! Kamya Punjabi Begins Her Pre-Wedding Rituals With Spirituality, Seeks Bappa’s Blessing Before Her Engagement With Shalabh Dang (View Pic).

Check Out The Pictures Shared By Kamya Below:

Here's A Video From The Wedding:

FYI, a day or two before the wedding, the couple had exchanged rings at a gurudwara amidst close family members. Reportedly, a grand reception in Delhi awaits after the marriage in Mumbai.  It was on February 10, 2019, when Kamya and Shalabh started dating each other and coincidently the two also got hitched on the same date a year later. This is the actress' second marriage and she already has a daughter from the first one. Stay tuned!

(The above story first appeared on LatestLY on Feb 11, 2020 06:36 PM IST. For more news and updates on politics, world, sports, entertainment and lifestyle, log on to our website latestly.com).