Kamya Punjabi took to her Instagram and shared some unseen pictures from her wedding festivities and it's surreal to another level. See for yourself. 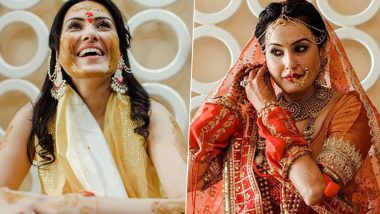 Former Bigg Boss contestant and also quite a well-known television actress, Kamya Punjabi is all joyous it seems. And why not? As recently she got hitched to the man of her life Shalabh Dang in a grand wedding ceremony on February 10, 2020. Right from that moment, Kamya is in no mood to calm down and has been teasing fans with pictures and videos from her wedding festivities. And now, the babe is at it again and has shared a bunch of photos on her Instagram and must say she looks every bit gorgeous in them. Kamya Panjabi and husband Shalabh Dang Look Dreamy In their Wedding Pictures, Check It Out!

The latest set of pictures shared by the actress are unseen ones wherein the glow and smile on her face is unmissable. Starting with the first photo in which we see Kamya in her shaadi attire, then she and Shalabh looking all sexy from the reception night to Kamya laughing like there's no tomorrow during her mehendi ceremony, the photos are indeed magical. Not to miss, in the second picture, we also get a glimpse of the customised effect on her lehanga which has 'Kamya weds Shalabh’ and ‘Sada Saubhagyawati Bhavah’ embroidered on them. Kamya Punjabi's Engagement To Shalabh Dang Proves Simplicity Is Precious (Watch Video).

Scroll Through Some Unseen Pictures From Kamya's Haldi to Shaadi Below:

Thank you my darling @anusoru for all ur hard work n running around to make this possible for me... thank you for being so patient with me n jheloing me so much 😛 you really made me feel special n beautiful like never before ❤️ i have really loved all my outfits 🤗❤️

FYI, Kamya's shaadi with Shalabh happens to her second marriage as earlier she was with Bunty Negi. The two have a daughter together named Aara. Kamya and Bunty made the decision to part ways in 2013 and also got divorced. Talking about Punjabi's new hubby, reportedly he is a healthcare professional. Stay tuned!

(The above story first appeared on LatestLY on Feb 21, 2020 06:06 PM IST. For more news and updates on politics, world, sports, entertainment and lifestyle, log on to our website latestly.com).