Taarak Mehta Ka Ooltah Chashmah: 'Daya Ben' To Return By Navratri, With Or Without Disha Vakani? 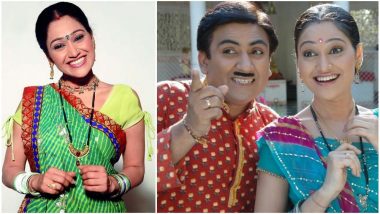 It has been months now since Disha Vakani who played Daya Ben is absent from Sab TV sitcom, Taarak Mehta Ka Ooltah Chashmah. The fans got to enjoy the re-runs of the old episodes of the show having her in the lead and have been demanding her return once again. As the new episodes are back in form post lockdown, her return is much-awaited. However, as per the latest reports, the makers will bring back the character 'Daya ben' irrespective of whether it is played by Disha. Taarak Mehta Ka Ooltah Chashmah Completes 3000 Episodes, Here's What Producer Asit Kumar Modi Has To Say.

There have been varied reasons cited by different media platforms about Disha's delay in re-joining the TMKOC cast. She took a break during her pregnancy but has extended it indefinitely. There have been multiple rumours around the same, claiming she will never return and also ones that claim that she is soon joining the cast.

But as the fans know, Navratri is special for the 'Gokuldham society' residents in this show, and even more special for 'Garba Queen' Daya ben. So, the makers have decided to bring back the character during the same period.

Pinkvilla.com quoted a source saying, "Talks are on and off with Disha Vakani related to the comeback. However, the various demands made by her family have been acting as a hurdle for the longest time. However, the makers are now certain to plan a return of Dayaben even if Disha doesn't agree. The makers don't want to keep the audience separated from one of their favourite characters, Daya and what better festival for her to return than Navratri?" Now, it has to be seen whether Disha gives a nod to her quick return or fans have to welcome a new Daya! Stay tuned.

(The above story first appeared on LatestLY on Sep 26, 2020 06:09 PM IST. For more news and updates on politics, world, sports, entertainment and lifestyle, log on to our website latestly.com).