In the spirit of festivity, during the Society meeting, an enthusiastic Jethalal volunteers to arrange for Navratri costumes for everyone in Gokuldhaam. But he soon discovers that he is unable to keep his promise. 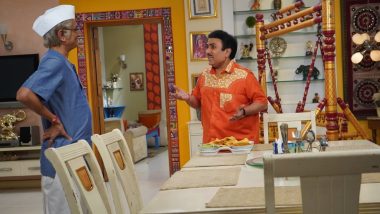 The upcoming episode of Taarak Mehta Ka Ooltah Chashmah will see Jethalal land in trouble all over again, this time over making a promise which now looks like he won’t be able to keep. In the spirit of festivity, during the Society meeting, an enthusiastic Jethalal volunteers to arrange for Navratri costumes for everyone in Gokuldhaam. In the Society meeting for Navratri celebrations, on the topic of attires for the occasion, everyone agrees on going with the traditional Gujarati costume. Taarak Mehta Ka Ooltah Chashmah Episode Update: Bhide Calls For Society Meeting For Navratri Celebrations, But Goes Missing.

That decided, the next task is to arrange for the costumes and Jethalal is quick to volunteer for it. Since he knows someone who keeps dresses for special occasions and festivals, without giving it another thought, Jethalal confidently promises to take care of the costumes for everyone. Taarak Mehta Ka Ooltah Chashmah Episode Update: Iyer Takes Up Meditation Until He Heards About the COVID-19 Vaccine, Babita Turns Into Menaka to Distract Him.

He then calls his friend for procuring the outfits but unfortunately discovers that due to the pandemic the vendor has stopped selling the Navratri outfits. This makes Jethalal feel stupid for having promised everyone about arranging for all their outfits and how he knows everyone in the trade. Taarak Mehta Ka Ooltah Chashmah Episode Update: Gokuldham Society Members Tell Their Tales of Woe To Champak Chacha.

Having promised everyone, Jethalal does not want to fail them and especially, not Babitaji. But how will he arrange the Navratri outfits? Does he have anyone else who he can count on for arranging the outfits? Or will he have to just disappoint Gokuldhaamites?

But there’s a twist. As a last resort, he can check with his brother in law Sundar. But as we all know Sunderlal is the last person who Jethalal will ever go to for help. Also, it seems like Sunderlal is pretty much his only option for arranging the Navratri outfits. Will Jetha approach him?

(The above story first appeared on LatestLY on Oct 23, 2020 07:34 PM IST. For more news and updates on politics, world, sports, entertainment and lifestyle, log on to our website latestly.com).