The Family Man Trailer: Manoj Bajpayee Is in Rollicking Form As He Struggles Being Both the Meek Husband and India’s Best Agent – Watch Video 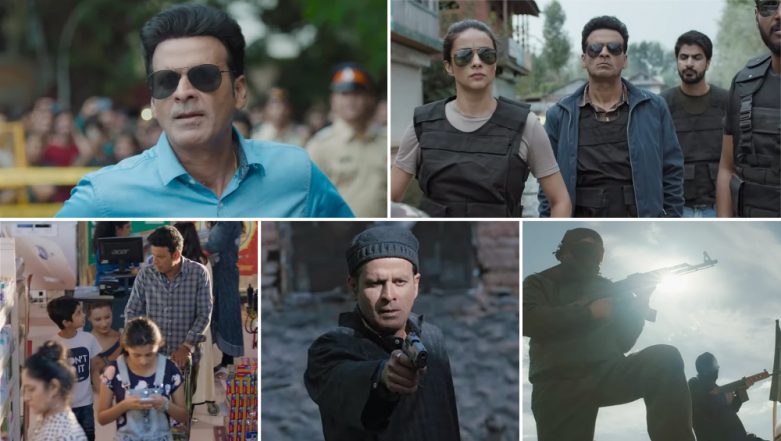 Remember the 1994 Hollywood actioner, True Lies, that was directed by James Cameron? The movie had Arnold Schwarzenegger as a boring salesman and a family man who is secretly a government agent tracking bad guys. Well, now we have our very own version of True Lies, not on the big screen, but coming straight to Amazon Prime Video. And guess what, it is both hilarious and thrilling too! Meet The Family Man, starring Manoj Bajpayee as the eponymous hero who strives to hide his identity as a special agent, by being a meek husband and father! The Family Man Teaser: Manoj Bajpayee is More than Just a Simple Middle-Class Man in This Exciting Amazon Prime Series (Watch Video).

The Family Man is directed by Raj Nidimoru and Krishna DK, popularly known as Raj & DK. Viewers familiar with their work in films like 99, Shor in the City, Go Goa Gone, knows the director duo's penchant for mixing black humour in whimsical situations. The Family Man's premise gives them an excellent ground to breed their irreverent style of narration, as they take the hero from stifling locales of the metropolitan cities to the dangerous terrains of Balochistan and Kashmir.

And of course, their leading man, Manoj Bajpayee, one of the finest actors in Indian cinema right now, is such an apt fit for the role, easily convincing us that he can be a family man who is afraid of road fights to being an agent who likes to go right in the middle of the action.

Watch the trailer of The Family Man right now:

In The Family Man, National Award-winning actress Priyamani plays the hero's frustrated wife. Gul Panag and Sharib Hashmi are seen as his associates from the National Investigation Agency. Malayalam actor Neeraj Madhav is also seen in the role of a holed-up terrorist, Moosa.

Others in the cast are Pawan Sharma, Dalip Tahil, Sharad Kelkar, Shreya Dhanwanthary, Sunny Hinduja, Abrar Qazi, and Darshan Kumaar. Telugu star Sundeep Kishan will also be a part of the series. The Family Man will start streaming on Amazon Prime India from September 20.