The Kapil Sharma Show is one of the most loved comedy show on Indian TV. Audiences go gaga over the jokes cracked by the artists on the show. However, television actor Mukesh Khanna has a different opinion. Check it out. 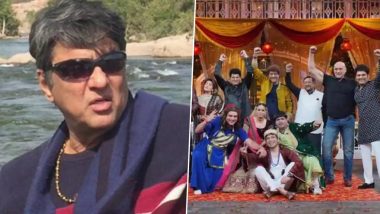 The Kapil Sharma Show is one of the most loved comedy show on Indian TV. Audiences go gaga over the jokes cracked by the artists on the show. However, television actor Mukesh Khanna has a different opinion. As in a long post on Instagram, the veteran star has slammed the show's ethics. Recently, the starcast of Mahabharata had graced The Kapil Sharma Show and had a ball of a time. However, Mukesh who essayed the role of Bhishma Pitamah on the mythological saga ditched the event. Clarifying, why he did not join the show, Khanna listed all the complaints he had with TKS. The Kapil Sharma Show: Bhojpuri Stars Ravi Kishan and Manoj Tiwari Come Together for One Entertaining Episode.

Mukesh in his post revealed that he was invited for the show along with the cast, however, he rejected the offer. That's not it, as he also tagged the comedy show as vulgar. "This question has become viral, why Bhishma Pitamah was not there in the Mahabharata show? Some say he had not been invited. Somebody says he refused it himself. It is true that Mahabharata is incomplete without Bhishma. It is true that there is no question of not inviting. It is also true that I was the one to reject the invitation,” he penned. Mukesh Khanna aka Shaktimaan Supports CarryMinati, But Advises Him To Make Better Choice Of Words (Watch Video).

Later in his post, the actor also mentioned the reason behind him rejecting the show. “The reason is that even though the Kapil Show is popular all over the country, I do not think there is a worse show than this. This show is full of fuhadpana, full of double meaning words, taking a turn towards vulgarity with every moment. In which the men wear women’s clothes, do cheap things and people laugh, holding their stomachs,” he wrote. Ahead, he did not even spare Archana Puran Singh and Navjot Singh Sidhu.

(The above story first appeared on LatestLY on Oct 05, 2020 06:48 PM IST. For more news and updates on politics, world, sports, entertainment and lifestyle, log on to our website latestly.com).