Bangladesh Foreign Minister AK Abdul Momen Says, ‘Next Phase of India-Bangladesh Relations Will Be Based on Shared Rivers’

Bangladesh Foreign Minister A.K. Abdul Momen on Saturday said that the next phase of relations between India and Bangladesh would be based on shared rivers. 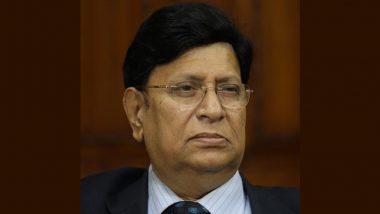 Guwahati, May 28:  Bangladesh Foreign Minister A.K. Abdul Momen on Saturday said that the next phase of relations between India and Bangladesh would be based on shared rivers.

Addressing the "NADI (River) Conclave 2022" in Guwahati, Momen said that Bangladesh believes in the expansion and extension of the waterway movement between India and Bangladesh. "We need to develop a win-win river and water sharing regime."

One of the biggest challenges in Bangladeshi rivers is siltation, he said.

"Historically, India and Bangladesh bondings are rock-solid while China is a development partner of Bangladesh. Further, we want to develop a strong relationship with all the states of India," Momen observed.

Quoting Indian Prime Minister Narendra Modi, Bangladesh Foreign Minister said that India-Bangladesh relation is going through a golden age. "We are looking forward to better relations in the coming decades."

"Noting that India and Bangladesh shared common challenges of climate change, the visiting Minister said that only last week, Assam, Bihar and Bangladesh faced flood at the same time."

"It's time for India and Bangladesh to work together in flood management. It is time to replace competition with cooperation," the Bangladeshi Minister said.

Momen said that Bangladesh is known as the "land of the rivers" as there are about 700 rivers including tributaries, which have a total length of about 24,140 km, one of the largest in the world.

"Rivers are the basic life lines of Bangladesh and are accessible to the remotest areas of the country whereas roads and railways do not have such accessibilities. In Bangladesh, rivers have huge impact on our tradition, culture, music, life style and livelihood. It can influence politics too. So, you understand how important the river is for Bangladesh," he said.

The Bangladeshi Foreign Minister said that at the historic juncture of completing 50 years of its bilateral ties, under the visionary leadership of Prime Minister of Bangladesh Sheikh Hasina and Prime Minister of India Narendra Modi, Bangladesh-India relationship is now passing its 'Golden Chapter'.

He said that with regard to Bangladesh's relations with India's northeastern states, factors like geographical proximity, close cultural and historical ties, and economic factors are hugely contributing to the ever-growing bond between Bangladesh and the northeastern region of India.

Bangladesh's robust engagements with India's northeastern states are intertwined and have always been at the heart of overall India-Bangladesh relationship.

It is widely accepted that there are huge prospects and potentials for promoting trade and investment and other economic activities between Bangladesh and the northeast region of India.

Momen said that Bangladesh solicits India's support to push the repatriation of the Rohingya refugees from Myanmar.

"Many of them (Rohingya refugees) are getting involved in drug trafficking and numerous criminal activities and these might become a threat for both India and Bangladesh," he said.

Since 2016, over 860,000 Rohingyas fled from Myanmar to evade violence, sheltered in various camps Cox's Bazar in southeast Bangladesh.

(The above story first appeared on LatestLY on May 28, 2022 07:12 PM IST. For more news and updates on politics, world, sports, entertainment and lifestyle, log on to our website latestly.com).