Doctors, patients and their family members are crying for oxygen in hospitals across India as the disease surges once more. In fact, it's not the production of oxygen that is a problem. India produces 7500 MT of oxygen per day. At the peak of the first wave of COVID the collective requirement of our hospitals was less than half this quantity per day. 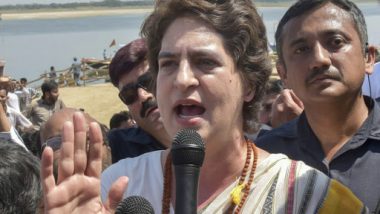 New Delhi, April 20: Priyanka Gandhi Vadra, General Secretary of the Congress has said that she is totally devastated due to pandemic, getting news of people dying without any medical support. Speaking to IANS she said that this is not the time for the Prime Minister to campaign but to wipe the tears of the people's eyes and protect the citizens from the deadly virus. She said her party is working with compassion and is trying to help out the needy but she questions the Prime Minister --Is it time to laugh in political rallies?

Q. How do you see the government's response after the second wave has hit the country?

A. The government's response has been extremely disappointing. The Prime Minister is still continuing with his election campaign while people are battling against the worst wave of COVID. At a time when the government should be focussing on fighting the catastrophic situation unfolding all around us, it appears to be practically absent. Even constructive suggestions from opposition parties are being dismissed as politicization rather than being accepted in the spirit that the nation is in a grave crisis and every single life matters, therefore, all of us must stand together and do whatever we can to save lives.

The lack of planning and preparation between the first and the second wave is the worst act of negligence and incompetent governance I have ever witnessed. COVID-19 Vaccination in Chhattisgarh: Bijapur Village Authorities Gives Tomatoes to People For Each Coronavirus Vaccine Shot.

Q. Do you think export of vaccines could have been avoided?

A. I would like to say that thanks to seventy years of forward-thinking governance, today India is the largest manufacturer of vaccines in the world. Yet, between January 2021 and March 2021, Modi ji's government enabled the export of 6 crore doses of vaccines to countries across the world. One lakh doses were gifted to the Nepalese Army, Mauritius received 2 lakh doses as did numerous other nations. During the same period, only 3 to 4 crore doses of vaccines were administered to Indian citizens. Why did the Modi government prioritize overseas PR and self-promotion over Indian lives?

Q. Do you think the government was not prepared and caught off guard?

A. As the second wave peaked in other countries, in the last 6 months India exported 1.1 million injections of Remdesivir. The export was stopped 5 days back. It is now clear that there is a shortage of Remdesivir being reported across the country.

Q. Why did the Modi government not ensure that production of Remdesivir was ramped up and made available to every Indian before allowing it to be exported to other countries?

A. Again courtesy years of forward-thinking governance, today India is one of the largest producers of Oxygen in the world. However, doctors, patients and their family members are crying for oxygen in hospitals across India as the disease surges once more. In fact, it's not the production of oxygen that is a problem. India produces 7500 MT of oxygen per day. At the peak of the first wave of COVID the collective requirement of our hospitals was less than half this quantity per day. It's the transport of oxygen that is causing the shortage because less than 2000 specialized trucks are available for the same.

A. In UP, the second wave has been devastating, look at the disturbing pictures coming from the state capital. I have held several meetings with Congress leaders and workers across the state and discussed what we can do to be of support to people during these tragic times. I have asked all our workers and leaders to be in constant communication with the public and do whatever is in their power to assist people with hospital beds, access to oxygen, medicines, etc. All our leaders and workers are doing as much as they can to this end.

Instead of providing the support and sensitivity needed at a time when almost every single family is battling the scourge, the UP government is acting as an aggressor towards the public. Insensitivity, red tape-ism and the collapse of the healthcare system is crushing people on every front whether it is permissions required for hospital admissions or the administration of Remdesivir or lack of beds, medication etc. We are trying our best to assist all those we can to facilitate these issues with sensitivity and compassion.

As a party, we are in the process of locating and organising spaces that can be converted into temporary facilities and handing them over to the government for use in the cities of UP that are facing the gravest crisis. We plan to equip these spaces with basic facilities before handing over. In some places we are trying to make arrangements for Oxygen generating equipment to be able to provide free oxygen to those in need. We are hoping that some of these efforts will be in place within the next few days.

We are constantly raising issues that the government needs to address urgently in order to press them into action and direct their attention to areas in which immediate steps need to be taken. I have written to the Chief Minister about certain issues and will continue to attempt to impress upon him the need for the government to be transparent, provide access to facilities and help those affected.

Q. People are feeling helpless across the country, don't you think the Govt has failed to respond with necessary alacrity?

A. The Prime Minister has completely failed to provide a sense of safety, direction or leadership during this massive human crisis we are facing. It is shocking that just day before yesterday, he was on a public stage addressing thousands of people with no covid protocol and laughing while doing so. What is there to laugh about? The entire country is in tears. There are no hospital beds available, medicines are running short, crematoriums are full, frontline workers are exhausted...

Where is the leadership? Where is the planning? Why are we short of facilities? Where is the money from the PM fund being used? Why has he done nothing to address the five major shortages of vaccines, beds, ventilators, oxygen and Remdesivir? Will he take responsibility for the bad planning and incompetence of his government?

And what about the millions of poor and the millions of honest workers in small businesses across the nation? What will they do now that we are faced with impending lockdowns and further suffering? What is the Modi government doing to support them? UP government's own Sero Survey results showed 5 cr people might have got the virus, several other Sero Surveys showed signs of a second wave coming, why did the Modi government block some of this research and ignore its findings.

Doctors, medical staff and frontline workers across the nation are risking their lives fighting the war against COVID and the Prime Minister has punished them by cancelling their insurance programs.

(The above story first appeared on LatestLY on Apr 20, 2021 04:23 PM IST. For more news and updates on politics, world, sports, entertainment and lifestyle, log on to our website latestly.com).