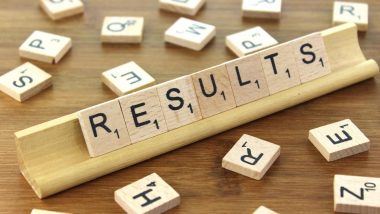 New Delhi, January 15: The Combined Higher Secondary Level (CHSL) Tier-1 examination result was announced by the Staff Selection Commission (SSC) on Friday. Candidates can check the SSC CHSL 2019 Tier 1 result on the official website - ssc.nic.in. The exam was held in computer-based mode at various centres across the country.

The examination was conducted from March 17 to March 19, October 12 to October 16, October 19 to October 21 and on October 26 last year. Those candidates, who cleared the exam, will now appear for Tier-II examination. According to a report published in Hindustan Times, the candidature of 21 candidates was cancelled as they found to have appeared in the examination twice. SSC CHSL 2020–21 Application Date Extended: Apply Till December 19 at ssc.nic.in, Check Revised Schedule Here.

The marks of the qualified candidates will be uploaded on January 19 on the official website. The Commission had also released the answer sheet of the candidates along with CHSL's answer-key. Reports inform that this time, as many as 4,893 vacancies were listed out by the Staff Selection Commission in CHSL.

(The above story first appeared on LatestLY on Jan 15, 2021 09:11 PM IST. For more news and updates on politics, world, sports, entertainment and lifestyle, log on to our website latestly.com).