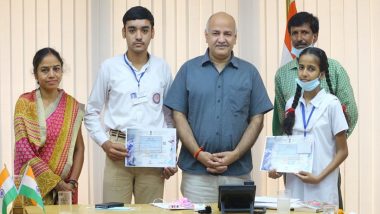 Verma said he looks upto his science teacher, Manju Bala, as his mentor who taught him that ‘science is the way to live’. Verma comes from a humble background; his father is currently unemployed due to the pandemic, and a mother who takes tuition classes. Despite his familial challenges, Verma aspires to be a scientist.

Similarly, Raikawar's father is a delivery agent with a homemaker for mother. The eldest of the three siblings, Raikawar also secured second place in Science Congress last year – but her ultimate dream is to become an IAS officer.

“I don’t feel like I’m a govt. school student; we have all the facilities now and I feel proud that despite not studying in a private school I can compete with students from around the country. It’s a proud moment for me,” Raikawar said. She also added that winning this competition reassured her that she’s at par with students who study in expensive private schools.

Sisodia said that we need to organise more events in the field of science to encourage participation of students from not just India, but all over the world. “We should aspire to have such world-class events so students from Europe, America and other countries come to India to participate in such events,” said Sisodia.

“The beauty of science is that it teaches us to question existing ideas and generate a new thought process. We need to encourage scientific thinking among our children,” said Sisodia. For this, the Delhi Govt. will constantly try to organise such all-India events so that the children of government schools in Delhi can take the country forward in the field of science.

“It’s a motivating experience for our children to meet the Deputy CM. This will now become an inspiration for our other children as we always aim to create a safe and learning environment for our students. I’m feeling proud that our students are being lauded nationally,” said Prity Saxena, principal, RPVV Paschim Vihar. She added that the prompt action by Sisodia after the results were declared and his eagerness to meet the students personally really motivated them, and their students.