India, the land of more than 500 languages is struggling to wipe out the dust of communal clashes which have overshadowed the shine and sparkle of its most important characteristic, Unity in Diversity. Every Indian who has watched news channels, read digital news websites or browsed Twitter, WhatsApp or Facebook over the past 4-5 days, is exposed to highly toxic 'hate porn', where all sorts of ideologies are trying to prove how abysmal the other side is. In this process, everyone is competing against each other to reach the zenith of hatred. Hatemongers are getting multiple orgasms on deaths, mutilated bodies, burnt schools and religious structures. They are celebrating the horrific acts on each other by telling them that this is the very outcome "we want against you."

The comments on pictures and videos of a son crying in front of his father's dead body or mother and sister sobbing inconsolably after finding their family member is mutilated will show less of sympathy and more of hostility. Videos of various places of worship vandalised, burnt and attacked by mobs are being celebrated as victory signs by those espousing extremist ideologies. Scenes which should make all Indians put our heads down in shame are being used for mudslinging against each other, these unverified videos are now being used to flash as breaking news and exclusives on various TV channels dying for TRPs. Within minutes, these videos become the most shared material on WhatsApp University and land as arsenal for mass destruction on other social media apps like Twitter, Facebook etc. No amount of fact check can correct the destruction done by these unverified, edited, fake and sometimes true but insensitive videos and photos.

Reporters should not be supporters, but today we have a clear demarcation of few news channels and websites which are termed as far-right and the others which are far left. Do we really have a news channel or digital portal which is neutral and doesn't want to cash in on the riots and clips leaking from unverified sources making them potential hate-mongering material for the extremists?

The act of violence shown and consumed on these various news platforms in the name of fearless journalism and bringing the breaking and exclusive news is knowingly and unknowingly spreading more hatred and also enticing and encouraging the consumers of this content to get polarised and in fact, they are not scared to share these gory images and videos with their friends and family on the family/society/office WhatsApp groups with one or the other polarised or fake message attached to it. What it does is, it makes these hate crimes, speeches acceptable in society. What we see, what we read daily remains in our subconscious mind and things which should shock and break us are now just regular stuff of daily news consumption and encourage and inspire other extremists to join the riots and violence against fellow humans, feeling more empowered and motivated assuming this is all normal and no crime, rather it is their duty to join this mass destruction to serve their ideology.

We at LatestLY tried to get away from showing this hatred on our platforms and decided to refrain from using any images or videos from riot-hit Delhi. Meanwhile, we continue to report the authentic information regarding fatalities, traffic and important updates related to security and necessary announcements by central or state government, judiciary or police. We have urged all netizens to not share any inflammatory messages and unverified information, videos, photos and images which can disturb the peace and integrity of our country, India. 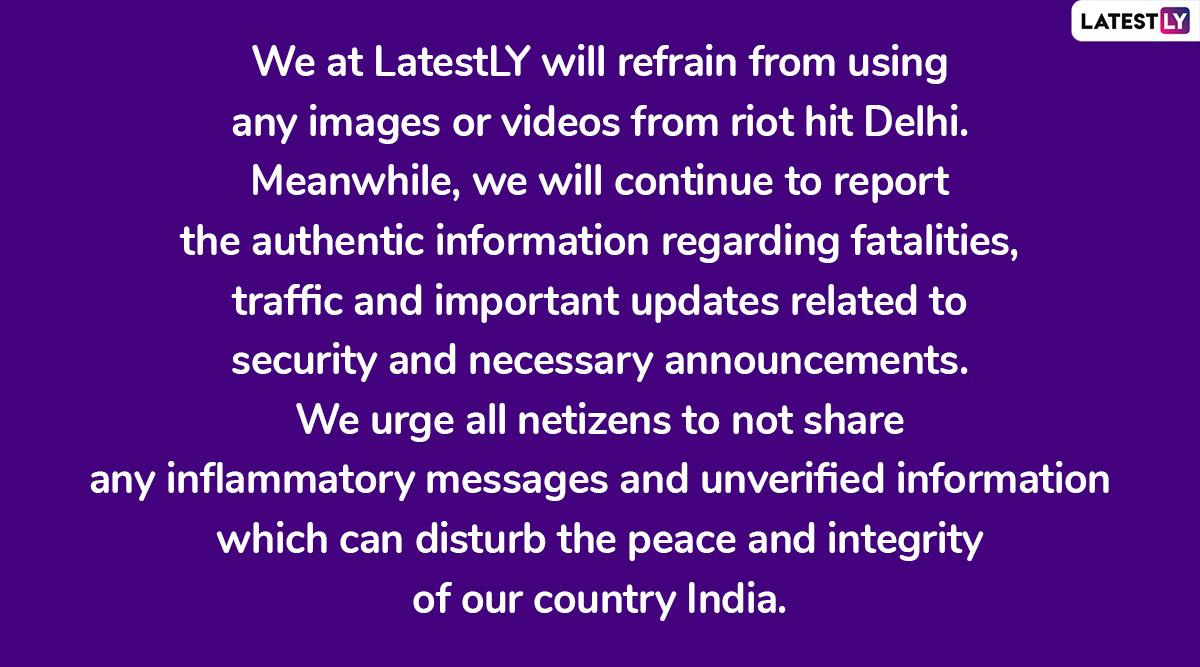 LatestLY's Stand on Reporting on Riots and Violence

But going by the sheer reach of all these 'Number 1' news channels (yes, every news channel in India is number one news channel as claimed by them), the effect of the coverage of riots and violence in masses will only increase hatred and in fact manipulate the judiciary while doing these media trials. In a recent bizarre case where one of the buildings in a riot-hit area of Delhi which is suspected to be crime spot was reduced to a mockery of forensic science by 'fearless' journalists analysing the so-called petrol bombs and acid packets with bare hands! The alleged murder spot which ideally should be cordoned off and sealed for investigation by experts was given free access to shoot one more 'hate porn' scene for these news channels and digital news portals.

In my humble opinion, exposing the masses to these gory scenes, bloodsheds, unreliable and edited videos in the name of exclusives and breaking news or freedom of speech is doing nothing better than breaking the integrity and unity of our country. Yes, the miscreants should be punished, reports should be filed against crime but these 'reports' should not sound as 'supports' for one ideology. No one should justify, celebrate or be happy on seeing bloodshed. Even if the victim is at fault, he or she should not be attacked or killed in riots. The law and authorities should take action, and if they are not moving, raise your voice against the authorities but don't take their job in your hands.  Let's be civil, we humans are 'animals' but don't forget we are 'social animals'.