While nine children were reported dead on the spot, nine others succumbed to the injuries on being rushed to the local Nurpur Government Hospital. 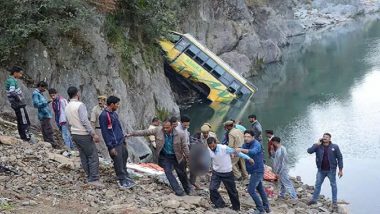 Shimla, April 9: At least 27 school children were reported dead on Monday after a bus ferrying them fall into a gorge in Himachal Pradesh's Kangra district.

Nurpur SDM Abid Hussain said the accident was first reported at 4:30 pm after the bus fall into a gorge nearly 100-metre deep. The accident took place while the bus was taking a sharp turn.

The children, enrolled in the Wazir Ram Singh Memorial School, were being dropped back home when the accident occurred. Reports claimed the driver of the bus, identified as Madan Lal, also died.

While nine children were reported dead on the spot, 17 others succumbed to the injuries on being rushed to the local Nurpur Government Hospital.

Expressing anguish over the incident, Kangra Superintendent of Police Santosh Patial said, "It has inflicted a heavy casualty." Further details are awaited.

Road accidents in the hilly terrain of Uttarakhand and Himachal Pradesh cause massive number of casualties each year. On nationwide scale, India is considered to be among the most riskiest place to drive. In 2017, a total of 1,46,377 motorists died.

(The above story first appeared on LatestLY on Apr 09, 2018 06:38 PM IST. For more news and updates on politics, world, sports, entertainment and lifestyle, log on to our website latestly.com).