Akash Ambani Wedding Rumours: Who is Shloka Mehta, Would be Daughter-in-Law of Mukesh Ambani 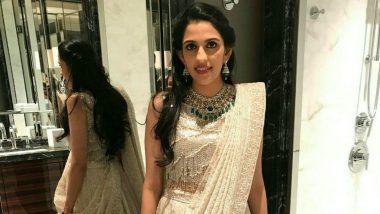 A news has been doing the rounds about Mukesh Ambani’s son Akash Ambani is likely to tie the knot with his school friend Shloka Mehta. The family hasn’t given any confirmations on the same but there have been speculations about the union of two business families. But who is Shloka Mehta? Let us tell you a few things about the speculated Bahu of one of the richest families- Ambanis

Sources close to the family say the engagement could be in the next few weeks and it would be likely a December wedding. The Mehtas and Ambanis have been family friends for long, so such a union between the two business families looks very likely. Akash and twin sister Isha are eldest of the three children of Mukesh and Nita Ambani. He is on the board of Reliance Jio, the group's fast-growing telecom venture.

(The above story first appeared on LatestLY on Mar 05, 2018 03:05 PM IST. For more news and updates on politics, world, sports, entertainment and lifestyle, log on to our website latestly.com).