Build-Up to Abrogation of Article 35A Begins, Does It Go Before August 15? 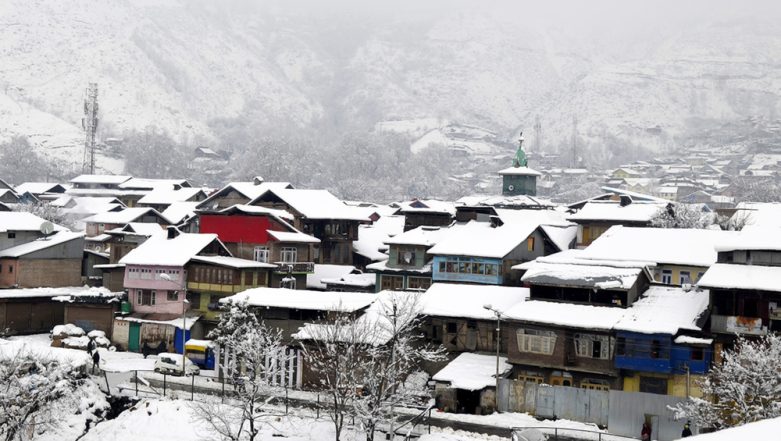 Srinagar, August 3: Most people in Jammu and Kashmir, especially in the Valley, believe that Article 35A of the Constitution is going amid reports that the idea of dividing the state into three union territories of Jammu, Valley and Ladakh is also being toyed with. For the common Kashmiri, the priority right now is completely different: the immediate concern is stocking rations, medicines, edible oil, salt, tea, pulses and vegetables. Top sources said security forces have been told to be in readiness during the next 24 hours for a Valley-wide clampdown. "We are giving a 72-hour window to Amaranath yatris and tourists to leave the Valley," a government source said. As the news about an impending clampdown spread in the Valley, the people mobbed ATM outlets and petrol stations.

While the authorities were drafting contingency plans, discussing and re-drafting them, the common man in the Valley was making his plans to adjust to the administrative and security arrangements. Nobody seems to know what was going to happen. Yet, nobody has any doubt that something big is going to happen. Cynics, who said Delhi cannot even toy with the idea of changing the state's special status, looked puzzled. Farooq Abdullah Threatens Centre Against Any Move to Abrogate Article 35 A and 370 in Kashmir.

As the state administration and the Central security agencies go through the familiar drills, Kashmiris have started preparing for a long hours of curfew, as the locals believe so. Governor Satya Pal Malik and his advisers trashed what they called "wild rumours and fake government orders" doing the rounds on the social media.

"Kashmir has been the breeding ground of rumours. If someone sneezes in Lal Chowk, I am told in the Raj Bhawan there is a blast. Rest assured everything is all right and normal," Malik told the media two days back. He then said yesterday that there was no plan at any level to abrogate Article 35A, which allows the Jammu and Kashmir state's legislature to define "permanent resident" of the state. The state administration thought the Governor's remark was good enough to scotch rumours.

It was National Security Adviser Ajit Doval's "secret visit" to Kashmir that set the rumour mill rolling. The NSA, it was said, had come for the Amarnath Yatra. But does the NSA have the time to spend three days in Srinagar? Officials said he did not take any security meeting during his stay here. But, nobody said he was on a holiday. Reports said the NSA met the Army Chief General Bipin Rawat inside an Army tent near the Amarnath cave shrine.

Doval left the Valley, keeping everyone guessing. Did he not take anyone into confidence? One man of course has the absolute confidence of the Prime Minister and the NSA, state Chief Secretary, B.V.R. Subrahmanyam. He is believed to be Delhi's eyes and ears and perhaps also the trusted hand in Srinagar. Subrahmanyam served as private secretary to then Prime Minister Manmohan Singh from 2004 to 2008. He worked with the World Bank in June 2008 and September 2011 before joining again in March 2012. When he moved to Jammu and Kashmir, he was handpicked by Prime Minister Narendra Modi.

When 10,000 paramilitary troops were brought in the Valley, it was called a routine movement of security forces. News reports that 250 more companies (nearly 100 men in a company) were ordered to reach Srinagar have been denied. Top sources said 70 companies were ordered to reach Srinagar out of which 34 have arrived here. Thus, the smokescreen of "routine movement of troops" wass finally dropped on Friday.

Friday evening, truckloads of provisions carried by the paramilitary forces were seen in Srinagar as ground forces were reportedly told to be ready for a Valley-wide curfew within the next 24 hours. Reports said mobile phones, cellular and fixed line Internet facility would also be snapped. All cable TV operators have reportedly been told to stop operations.

All sensitive installations have been taken over by the state police and the paramilitary forces including the CRPF, BSF, SSB and the ITBP. Local police guards at shrines have been withdrawn on apprehensions of weapon snatching by militants.

All police stations have received their requirements of reinforcement and communication. Some locals are still using the time available to buy few essentials they might have forgotten to buy. This all leads to the all important question: what does the Centre want to do? If former Chief Minister, Omar Abdullah is to be believed, it cannot just be for abrogation of article 35A or delimitation. Omar believes alerting the Air Force and the Army does not gel with the idea of abrogating Article 35A.

What else can it be? Informed sources said the centre has discussed two plans for "settling the Kashmir issue for good". One is to divide the state into three centrally administered union territories. Top sources say this would need a constitutional drill that might take several weeks.

The second option is abrogation of Article 35A. The order promulgating this Article that gives the state legislature the power to define state's permanent residents and their privileges, was issued by then President of India Rajendra Prasad on May 14, 1954. The order was issued by the President exercising powers he has by virtue of section 1 of Article 370. The order was never ratified by Parliament. Constitutional experts say the President of India can rescind the order using the same powers he enjoys under section 1 of Article 370.

Constitutional experts say the order to rescind (abrogate article 35A) would be constitutionality and legally valid. It is also said the abrogation of 35A would be called the completion of the unfinished task of integrating the princely states into the union of India and undertaken by Sardar Patel.

"After abrogation of 35A, Kashmir would not only be an integral part of India, it will be India itself", the assertion of a top BJP leader would, in all likelihood, become a reality before the country celebrates its Independence Day in August 15.