Jake Hoffman | The TSX traded baby food company (TSXV:BABY.V) was named by the investment community as the “Oatly of Babies”, has built a vast North-American and online distribution network ad now starts growing rapidly within families across North-America 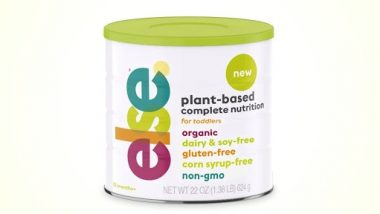 Jake Hoffman | The TSX traded baby food company (TSXV:BABY.V) was named by the investment community as the “Oatly of Babies”, has built a vast North-American and online distribution network ad now starts growing rapidly within families across North-America

The innovative baby food formula developer (www.elsenutrition.com) rose to capital markets’ awareness in the past year providing world’s only real alternative to cow-milk and soy-based infant formula. The Toronto Stock Exchange traded company (TSXV:BABY) launched baby food products under the “ELSE” brand  that were acclaimed by thousands of parents and pediatricians in the U.S. stating the formula was nothing short of a revolution of infant nutrition.

ELSE, has been outperforming market expectations since inception, hitting all major milestones in its development and now have launched its products in the U.S. market nationwide retail stores and online mega players like Amazon.

They have developed the first 100% plant-based non-dairy and non-soy formula that is nutritionally equivalent to breast milk. It is the only, natural baby milk, which is free of hormones, antibiotics, gluten, hexanes, GMOs, palm oil and corn syrups. Else is building out a portfolio of products centered on this novel nutrition formula including sales of infant formula, toddler/children complete nutrition drinks, and complementary nutrition baby food,

Leading food-tech analysis and banks such a Canaccord ad others forecast Else's global sales to grow to almost $1.0B by 2026 (200% CAGR) with approximately $127m in EBITA.

Their opening of sales push seems definitely in the right direction and with the massive distribution net they have cast, there is more to evidence that this company may indeed fulfill on the promise.

ELSE has become one of the most interesting companies to watch in the food-tech arena, resembles in many ways the meteoric rise of Oatly and Beyond Meat. It has attracted a multitude of followers with a growing fan-club among U.S and Canadian parents and pediatricians  it rapidly gains the interest of leading investment banks such as Canaccord Genuity and others.