The affected companies have been identified as Alma, Vaishnavi, Naralabs, Proton and Naik Environment, are located along Thane-Belapur Road. 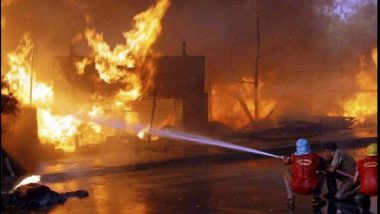 Mumbai, April 25: News of a massive fire at a chemical factory in Belapur, Navi Mumbai has just come. According to an ANI report, 12 fire engines have been pressed into action. As per other reports, the raging fire, which broke out around 2 am, could be seen from miles and there were frequent sounds of explosions. The fire is set to have affected four other factories and destroyed properties worth crores of rupees.

The affected companies have been identified as Alma, Vaishnavi, Naralabs, Proton and Naik Environment, are located along Thane-Belapur Road. Those who got injured in the fire have been rushed to the hospital. There has been no news of any casualties till now.

Fire broke out in a chemical factory in Belapur (Mumbai); 12 fire tenders at the spot. (earlier visuals) #Maharashtra pic.twitter.com/xhYNvyjaBx

Last year, nine workers of a chemical plant were injured after a major fire engulfed it at Turbhe in Navi Mumbai. Reportedly, the fire had started owing to a reactor blast. Nearly 30 workers were in the factory — located at plot no D-16 near Balmer Laurie company in the MIDC industrial area — when the fire broke out.

(The above story first appeared on LatestLY on Apr 25, 2018 10:45 AM IST. For more news and updates on politics, world, sports, entertainment and lifestyle, log on to our website latestly.com).