Such tragic incidents of deaths due to the carelessness of the respective authorities is disheartening! 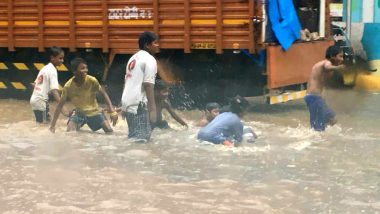 Mumbai, June 08: A two-year-old boy lost his life after he fell into an open drain in Mumbai, on Thursday, after heavy rainfall in different parts of the city. Despite the efforts by the BrihanMumbai Municipal Corporation (BMC) to rescue the infant, he was declared dead on arrival by the hospital authorities.

Mumbai witnessed brief spells of heavy downpour, on June 7, across the city. The moderate to heavy rainfall resulted in a death of the two-year-old boy who drowned in the open drain and lost his life.

As per a Hindustan Times report, the BMC officials had managed to rescue the toddler and even rushed him to Shatabdi Hospital in Govandi. Sadly, his life couldn’t be saved, and the medical authorities declared him dead on arrival.

The infant, who was later identified to be Arihant Tombli, had fallen into a nullah at Chembur Cheetah Camp, in Mumbai. The unfortunate incident took place at around 1.30 pm on Thursday. Is Mumbai Ready for Monsoons 2018? BMC to Install CCTV Cameras at Flood Prone Areas, CM Devendra Fadnavis Takes Review.

Such incidents of deaths due to the carelessness of the respective authorities is disheartening. Only a few days ago, there were three deaths reported in Mumbai city due to electrocution. Out of the three persons who lost their lives, two were minors.

As per the India Meteorological Department (IMD) reports, there are moderate to heavy monsoon showers predicted in the city over the next few days. The IMD has issued warnings for a heavy and prolonged spell of rains on June 8 and June 9. However, the city will have a respite from June 10 when the intensity of rains are predicted to decrease.

(The above story first appeared on LatestLY on Jun 08, 2018 11:11 AM IST. For more news and updates on politics, world, sports, entertainment and lifestyle, log on to our website latestly.com).