Who Is S Somnath? Know All About Rocket Scientist Who Will Succeed K Sivan As ISRO Chairman 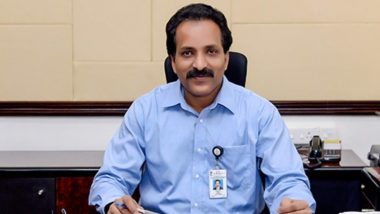 S Somnath is currently serving as the director of the Vikram Sarabhai Space Centre (VSSC) in Thiruvananthapuram since January 2018. He will resign from the post on January 14 to take charge of his new duties.

GoI appoints S. Somanath to the post of Secretary, Department of Space and Chairman, Space Commission (ISRO) for a combined tenure of three years from the date of joining of the post... pic.twitter.com/Tq20WUQILD

He played an instrumental role in the development of the GSLV Mk-III launcher and the Polar Satellite Launch Vehicle (PSLV). The first-ever experimental flight of the Crew Module Atmospheric Re-entry Experiment (CARE) mission was accomplished under his leadership on December 18, 2014. Look Ahead 2022: From Chandrayaan-3 To Aditya L 1 Mission to The Sun, Here Are India’s Big Ticket Science Missions Planned For The Year 2022.

S Somnath was born in July 1963 in Kerala, where he got his primary education. S Somnath completed his mechanical engineering from TKM College of Engineering in Kerala. Later, he went on to complete his Post Graduation in Aerospace Engineering, specialising in Dynamics and Control from the Indian Institute of Science (IISc), Bangalore.

He Joined VSSC in 1985 and has been associated with the Polar Satellite Launch Vehicle (PSLV) Project At the ISRO during its initial phase. He was then selected to lead the GSLV Mk-III project from June 2010 to 2014. ISRO Working on Futuristic Technologies, Intelligent Satellites, Says Chairman K Sivan.

(The above story first appeared on LatestLY on Jan 12, 2022 09:08 PM IST. For more news and updates on politics, world, sports, entertainment and lifestyle, log on to our website latestly.com).