JRD Tata 116th Birth Anniversary: Here Are Some Lesser-Known Facts About the Father of Indian Aviation 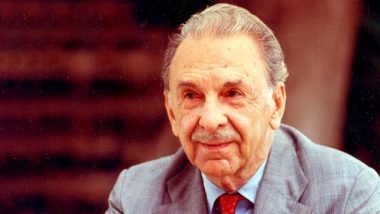 Jehangir Ratanji Dadabhoy Tata, popularly known as JRD Tata, was born on July 29, 1904. Known as the father of Indian aviation, JRD Tata was an Indian aviator, entrepreneur, chairman of Tata Group and the shareholder of Tata Sons. He was the son of noted businessman Ratanji Dadabhoy Tata and Suzanne Briere. This year, we celebrate the 116th birth anniversary of JRD Tata. His mother was the first woman in India to drive a car. In 1929, JRD Tata became the first licensed pilot in India. He is also best known for being the founder of several industries under the Tata Group, including Tata Consultancy Services, Tata Motors, Titan Industries, Tata Salt, Voltas and Air India.

In 1983, JRD Tata was awarded the French Legion of Honour. He received two of India's highest civilian awards the Padma Vibhushan and the Bharat Ratna- in 1955 and 1992 respectively. These honours were bestowed on him for his contributions to Indian industry. On his birth anniversary today, let's look at some lesser-known facts about the great business tycoon.

Here's are some lesser known facts about JRD Tata:

JRD joined Tata Sons as an unpaid apprentice in 1925. In 1938, at the age of 34, JRD was elected Chairman of Tata Sons making him the head of the largest industrial group in India. He took over as Chairman of Tata Sons from his second cousin Nowroji Saklatwala. For decades, he directed the huge Tata Group of companies, with major interests in steel, engineering, power, chemicals and hospitality. He was famous for succeeding in business while maintaining high ethical standards – refusing to bribe politicians or use the black market.

(The above story first appeared on LatestLY on Jul 29, 2020 08:30 AM IST. For more news and updates on politics, world, sports, entertainment and lifestyle, log on to our website latestly.com).