PM Narendra Modi during his 68th edition of the monthly radio broadcast Mann ki Baat lauded the farmers for proving their mettle during this corona pandemic. He also spoke on National Education Policy and India becoming a hub of toy production. Apart from this, PM Modi urged young talent to develop online games under the Atma Nirbhar Bharat initiative. 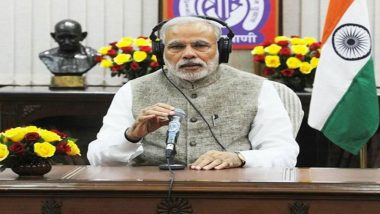 New Delhi, August 30: Prime Minister Narendra Modi during his 68th edition of the monthly radio broadcast Mann ki Baat lauded the farmers for proving their mettle during this coronavirus pandemic. He also spoke on National Education Policy and India becoming a hub of toy production. Apart from this, PM Modi appealed young talent to develop online games under the Atma Nirbhar Bharat initiative.

Speaking on the issue of India becoming a hub of toy production, PM Modi said, "We have brainstormed on how to make available innovative toys to India’s children, how to make India a hub of toy production." Adding more, he said, "Impact of toys on various aspects of children’s lives has been given significant attention in the National Education Policy." PM also appealed the young entrepreneurs to 'Make Games in India' and 'Make Games of India' under Atma Nirbhar Bharat. He said, "My appeal to the young talent of the country is Make Games in India and Make Games of India; it is said, Let the Game Begin...so come, let us play." NEET-JEE Exams 2020 Row: Mamata Banerjee Dares PM Narendra Modi to Take Impromptu Opinion of Students During ‘Mann Ki Baat’.

Asking the startups of India to strive for innovation, PM Modi said, "I call upon my start-up friends and new entrepreneurs to team up for toys; let us together make toys; it is time for everyone to be vocal for local toys." Adding more, he said, "You also come forward, innovate and implement something; your efforts in today’s small startups will transform into global conglomerates tomorrow and make a mark for India."

PM Modi mentioned an app 'Ask Sarkar' and stated that people can interact via a check board and get accurate information about any government scheme. He mentioned that September will be observed as ‘Nutrition Month’ as the nation and nutrition are inextricably linked. Elaborating more, the Indian Premier said that a good and nutrition quiz will be organized on mygovindia portal and there will be a 'Meme' competition too. He cited the example of Statue of Unity in Gujarat where a nutrition park has been developed.

Applauding the farmers, PM Modi said, "Our farmers have proved their mettle even during this corona pandemic; the sowing of Kharif crops has been 7% higher than last year; paddy has been sown 10% higher, pulses 5%, coarse grain, oats, cereals around 3%, oilseeds about 13%."

Among other things, PM Modi spoke on pride canines of Indian Army -- Sophie & Vida -- who were conferred with Chief of Army Staff Commendation Card and honoured for discharging their duties while defending nation. He also said, "Among the Indian breeds, Mudhol Hound and Himachali Hound are high pedigree dogs; Rajapalayam, Kanni, Chippiparai and Combai are also very good Indian breeds; now our security agencies have also inducted Indian breed dogs in their units."

PM Modi once again applauded the teachers and asked the Indias to celebrate 'Teachers Day'. Asking the citizens to be cautious amid the COVID-19, PM Modi said, "Corona will be defeated when you will remain safe; when you fulfil the resolve of keeping a safe distance of two yards and wearing masks."

PM Modi's 'Mann Ki Baat' programme comes a day after the Union Home Ministry further relaxed restrictions in phase 4 of Unlock. The central government has allowed states and Union Territories to permit 50 per cent of teaching and non-teaching staff in schools. However, schools colleges and educational institutions will continue to remain closed until September 30. During his last Mann Ki Baat address, PM Modi had cautioned citizens against the spread of COVID-19. He had also asked citizens to wear masks and maintain social distancing. He even spoke on success stories of the country’s rural areas.

(The above story first appeared on LatestLY on Aug 30, 2020 11:50 AM IST. For more news and updates on politics, world, sports, entertainment and lifestyle, log on to our website latestly.com).