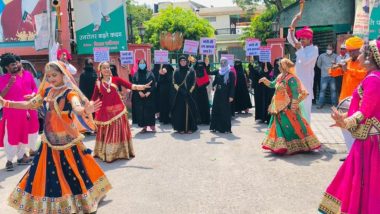 Speaking on the occasion, Union Minister Mukhtar Abbas Naqvi thanked Prime Minister Narendra Modi for empowering Muslim women. "When the Prime Minister announced that triple talaq should be abolished, many were angry. Yet it was criminalised. You can now see that triple talaq cases have come down considerably," said the Minister while addressing a thin crowd of Muslim women in person. The interaction was also telecast virtually. He further elaborated that on August 1, the President gave the approval to make triple talaq criminal.

"In 1985 Congress made a terrible mistake which made Muslim women pay heavily. Communists who speak about women's empowerment were against its abolition," said the Minister. He pointed out that women posted videos with hashtag #ShukriyaModiBhaiJaan.

As around 15 Muslim women entered the room where Union Ministers Mukhtar Abbas Naqvi, Smriti Irani and Ravi Shankar Prasad were to address them, and others virtually connecting across the states, they were greeted by PM Modi's speech in Parliament when the law against triple talaq was passed, a year ago.nSelective excerpts of the Prime Minister's speech where he counted opportunities given and missed by the Congress to work for the upliftment of Muslim women were played.

Union Minister Smriti Irani spoke about how the Prime Minister ensured the empowerment of women through various schemes. As Eid and Raksha Bandhan are around the corner, Irani congratulated women and thanked the Prime Minister for ensuring women's empowerment. "Naqvi Ji always told me that he will give me an Eidi that will make me be proud of him. Today is one such day," she said.

Taking a dig at Congress she said that Congress cared more about its survival than giving justice to women. She did mention how she adhered to the Prime Minister's appeal of wearing face mask and 'do gaj ki doori'. "This country had a woman Prime Minister but it was PM Modi who cared for the empowerment of women through initiatives like toilets construction, the opening of bank accounts and 10 crore families being benefited by Arogya Setu scheme," she said. "80 lakh poor women got screened for breast cancer like diseases. I believe a day will come when we will see Muslim women leading digital literacy," she said.

Speaking on the occasion, Union Law and Justice Minister Ravi Shankar Prasad asked why did it take India 70 years to bring a law against triple talaq and pointed out it is a "law for women's rights and self-respect". He said that he will work towards suggestions to make Muslim women digitally literate. n"Let's make these women digitally literate. One-third of employees of IT ministry are women," said Prasad.