Piyush Goyal said, Indian Railways will invest Rs 75,000 crore on a signalling system project to be implemented across India. 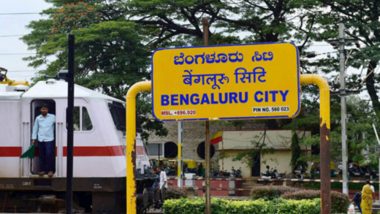 Bengaluru, Mar 9: The South Western Railways has prepared a pre-feasibility report for the long-pending Bengaluru suburban railway, which envisages an investment of Rs. 12,000 crore for the 168-kilometer network, nearly half of which will be elevated, Railway Minister Piyush Goyal said.

He also announced that Indian Railways will invest Rs 75,000 crore on a signalling system project to be implemented across India. "We will bring the most modern technology of European Train Control System in India and it will be implemented across the country. It will ensure safe journey," he told reporters here Thursday evening. He did not give further details for either project.

Goyal also said the Railways will invest Rs 5,000 crore for upgrading stations and bringing in the most modern locomotives rail coaches. He said he had written to the Karnataka Chief Minister Siddaramaiah in January, proposing that the Railways and the state government share the cost of the upgradation equally, instead of letting Karnataka bear 80 per cent of the cost.

"We can do a cost sharing of 50-50 between the state government and the Indian railways and against that, they (state government) can allow us to increase the Floor Area Ratio or Floor Space Index of all our stations, so that we can raise some revenue by developing the stations, making them modern and passenger friendly", he said.

Replying to a query on train punctuality, the minister said the delay in track renewal work was hampering the speed of trains. If a damaged track is not replaced, safety is compromised and speed restriction has to be imposed, slowing down trains, he said. Earlier 233 km of tracks were renewed every month but in December 2017, railways did 476 km of track renewal, he said.

"In January, 2018, railways did 576 km of track renewal and in February we did 560 km ... That is the scale-up to make the Indian Railways safer. With this, all the speed restriction will go away and we will have faster trains," Goyal said.

When asked about the Railways' stand on the controversial Thalessery-Mysuru railway line, he said, "I am given to understand that there is lot of opposition to this line because it passes through very, very eco-sensitive wildlife areas and environment can be damaged."

"In that situation, if it is not in the interest of Karnataka, we will certainly not like to damage eco-sensitive zone or the wildlife area. In that case, Indian Railways has no particular interest that this project has to be pursued." The Union minister also inaugurated an all-woman railway station at Banaswadi in Bengaluru, the fifth one in the country. He also launched a mechanised laundry with a capacity to wash 10,000 bed rolls everyday.