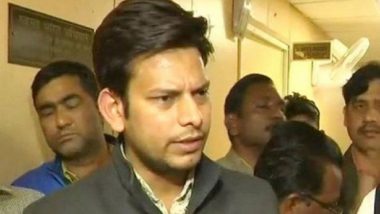 New Delhi, June 24: Aam Aadmi Party (AAP) MLA Prakash Jarwal, arrested for allegedly abating the alleged suicide of a doctor, was granted bail by the Delhi High Court on Wednesday. The bail was sanctioned to him on the conduction of furnishing a bail bond of Rs 25,000 before the Jail Superintendent. Delhi Doctor Commits Suicide; AAP MLA Prakash Jarwal Booked on Abetment Charge.

The bench which heard the defence counsel arguments was headed by Justice Suresh Kumar Kait. Jarwal was asked to cooperate with the police and refrain from hindering in the course of investigation, tampering with the evidence and contacting witnesses.

Jarwal landed in row after Rajendra Singh, a doctor in Durga Vihar locality of South Delhi, died by suicide on April 18. In his suicide note, the deceased doctor reportedly blamed the AAP legislator for compelling him to take the extreme step.

Jarwal had gone missing after media reports showed that the doctor had blamed him for the suicide. After being arrested by the police in April-end, the MLA issued a statement alleging a conspiracy against him.

The case against the AAP MLA was filed by the late doctor's son. The chargesheet filed by police books him under the IPC sections related to the abetment of suicide.

(The above story first appeared on LatestLY on Jun 24, 2020 03:35 PM IST. For more news and updates on politics, world, sports, entertainment and lifestyle, log on to our website latestly.com).