Harry, originally from South Africa where he received a private pilot license (PPL), first came into the limelight in 2019 after becoming India's first transgender trainee pilot. 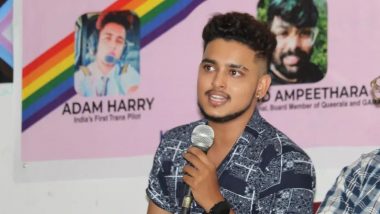 Mumbai, July 5: The 23-year-old pilot Adam harry had to put his dream to fly an aircraft on hold and is now forced to work as a food delivery executive for Zomato after the Director General Civil Aviation (DGCA) denied him a medical certificate declaring him temporarily unfit for flying as he was undergoing hormone therapy.

Harry received a private pilot license (PPL) in South Africa. He first came into the limelight in 2019 after becoming India's first transgender trainee pilot. He later enrolled at Rajiv Gandhi Academy for Aviation Technology in Thiruvananthapuram in January 2020 for a commercial pilot license under the Kerala Government’s welfare fund for transgender people, reported The Hindu. International Day Against Homophobia, Transphobia and Biphobia 2022: Date, Theme, History and Significance of the Day To Raise Awareness of LGBT Rights Violations.

However, after an extensive evaluation, the DGCA declared him “temporary unfit” on medical grounds as Harry is undergoing “cross-sex hormone therapy”. Harry, while talking to the media outlet, said, "The officials were transphobic and asked very personal questions about my physicality and how would I marry someone. They were bullying me to undress, even when I asked for a female assistant. I was told how could they risk 200 people's lives by giving me a job."

(The above story first appeared on LatestLY on Jul 05, 2022 09:13 PM IST. For more news and updates on politics, world, sports, entertainment and lifestyle, log on to our website latestly.com).