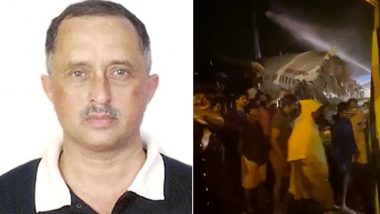 Kozhikode, August 7: In a tragic incident, Air India Express Flight IX-1344 skidded off the runway at Calicut Airport in Kerala’s Kozhikode. According to reports, 14 people reportedly lost their lives in the crash. Among the deceased was captain of the Aircraft, Wing Commander (Retd) Deepak Vasanth Sathe. He was one of the two pilots of the Air India flight returning from Dubai. Air India Express Dubai-Kozhikode Plane Crash: 14 Dead, 123 Injured as Flight IX 1344 Skids Off Runway, Confirms Malappuram SP.

Sathe was one of the decorated officers of the Indian Air Force. He was also a winner of the sword of honour during Passing Out Parade at Air Force Academy in 1984. He retired from the IAF in 2003. The former IAF officer flew the MiG-21 fighter aircraft with 17 Squadron (Golden Arrows) in Ambala. Wing Commander Sathe also served as experimental test pilot military aviation for 12 years from 1991-2003.

“He was very professional and was awarded the 58 NDA, President Gold Medal. He had been a test pilot for the Air Force,” reported NDTV quoting an officer as saying. Wing Commander had a vast experience in flying Boeing 737. He was also a test pilot at Hindustan Aeronautical Limited (HAL) for some time. Air India Express Plane Crash in Kozhikode, Landslide in Idukki; Two Tragedies in 24 Hours Leave Kerala in Mourning.

The Air India Flight IX-1344 was part of Vande Bharat Mission. The runway was surrounded by deep gorges on both sides. As per flight-tracking website FlightRadar24, the aircraft made two landing attempts on the tabletop runway. At Least 123 people were also injured in the crash. The accident was reported as soon as the plane landed at the Karipur airport in Kozhikode and skidded off the runway. Preliminary reports claimed that the ill-fated from Dubai landed at 7:38 pm, when incessant rainfall was underway.

(The above story first appeared on LatestLY on Aug 07, 2020 11:49 PM IST. For more news and updates on politics, world, sports, entertainment and lifestyle, log on to our website latestly.com).