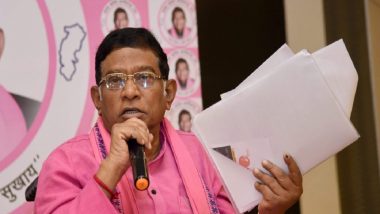 Raipur, May 29: Former Chhattisgarh Chief Minister Ajit Jogi passed away on Friday at a private hospital in Raipur. The announcement of the demise was made by his son Amit Jogi. He also informed that last rites of his father will be performed on Saturday, May 30, at birthplace Gaurella, also known as Pendra road. Ajit Jogi Dies at 74: Former Chhattisgarh CM No More, Confirms Son Amit Jogi.

"I am out of words in the hour of grief. May God give peace to his soul. Last rites will be held in his birthplace Gaurella," he added. Ajit Jogi Dies at 74: Chhattisgarh's Once-Tallest Leader Dies After Vehement Struggle to Keep Political Legacy Alive.

Jogi, who served as first chief minister of Chattisgarh after the formation of the state, was admitted at Raipur hospital on May 9 after suffering a cardiac arrest. Since then, his health remained critical and was on ventilator support.