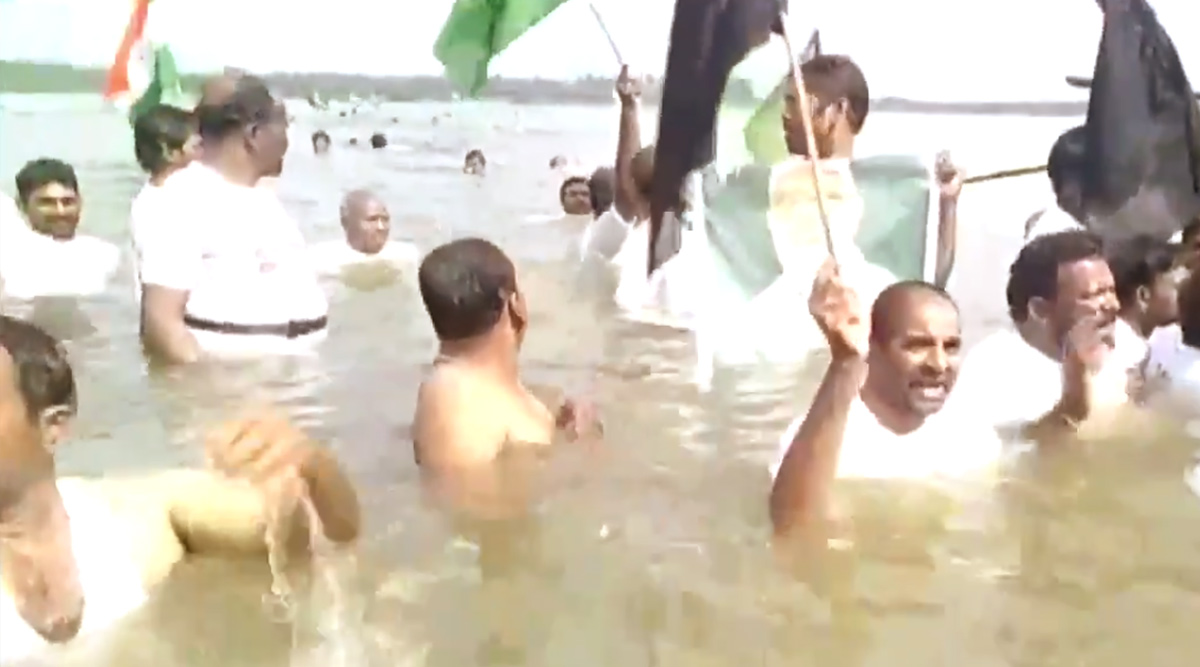 Hyderabad, January 28: Protests against Andhra Pradesh government’s decision of having three capitals for the state intensified. People in Rayapudi area of Amaravati on Tuesday protested in Krishna river against the Jagan Mohan Reddy government’s decision. The video of people staging a protest in Amaravati has surfaced on social media. As per the clip which has emerged, the demonstrators could be seen entering the river holding black flags. Andhra Pradesh Capital Row: Chandrababu Naidu, TDP MLAs Detained in Amaravati After Trying to Launch Protest Against State Govt.

On January 20, The Andhra Pradesh Legislative Assembly passed the AP Decentralisation and Inclusive Development of All Regions Bill, 2020 that intended to give shape to state government's plan of having three capitals. As per the bill, the state will have executive capital in Visakhapatnam, legislative in Amaravati and judicial in Kurnool.

However, in the Upper House of the state legislature failed to pass two crucial Bills related to its plan of having three capitals for the state. Three bills were -  AP Decentralisation and Inclusive Development of All Regions Bill, 2020, and the AP Capital Region Development Authority (CRDA) Act (Repeal).

After the state government failed to get these bills passed in the Legislative Council, Andhra Pradesh Chief Minister YS Jagan Mohan Reddy, moved a resolution on Monday abolishing the State Legislative Council. The bill was unanimously passed by the assembly. However, the main opposition party, TDP, stayed away from voting on the resolution, which will now be sent to the Centre for necessary follow-up action. There were widespread protests against the state government’s decision of having three capitals.