A dog died after it was thrashed brutally in Delhi by two men with sticks. A video of the incident has gone viral. A case has been registered against the two men in this regard. 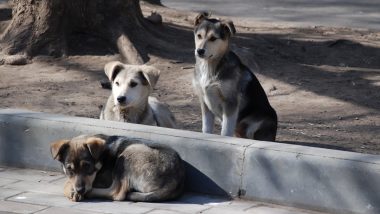 New Delhi, November 13: An incident of animal cruelty has been reported from Delhi. According to report, two men allegedly thrashed a dog brutally and mercilessly with sticks in Shahdara area of the national capital. The animal later died because of injuries. Two people have been booked in the matter. Report informs that the incident came to light after a food stall owner, who is also the complainant in the case, saw a video on his mobile phone wherein the duo was seen beating the dog and he approached the police. Animal Cruelty: Kerala Woman Sets Dog, 7 Puppies on Fire; Booked After Video Surfaces.

According to a report by the Times of India, the police launched an investigation into the matter and have identified the two men who were seen thrashing the animal in the viral video. Both the men was said to be elderly. A police officer reportedly said that they have not questioned the the duo so far. The dog died because of injuries after being beaten up by the two mean. What Do You If You Witness Animal Cruelty? Steps to Take if You Encounter Animal Abuse.

A similar incident of animal cruelty was reported from Delhi in May this year. Two men had thrashed a dog to death with sticks in Okhla area of the national capital. The brutal incident was caught in a video which was circulated widely on social media platforms. A case was registered under section 429/34 IPC, 11A Prevention of Animals Cruelty Act, and others and two people were arrested.

(The above story first appeared on LatestLY on Nov 13, 2021 05:53 PM IST. For more news and updates on politics, world, sports, entertainment and lifestyle, log on to our website latestly.com).