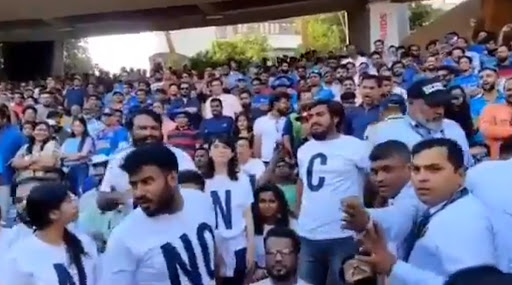 Mumbai, January 14: Some of the Indian Cricket fans cheering up for the national team at the Wankhede Stadium in Mumbai on Tuesday were seen wearing t-shirts with messages protesting against the Citizenship Amendment Act (CAA), National Register of Citizens (NRC) and updation of National Population Register (NPR). With their images going viral on social media, they were soon asked to leave the cricket stadium or change their t-shirt by the security staff.

Earlier, at the entry gate only, the security officers had reportedly asked the spectators to change their shirts or caps which were then confiscated at the gate. Since protesting against the CAA, NRC and NPR has not been allowed through any means at the stadiums, several cricket fans chose to wear t-shirts with single alphabet which they could probably join along their friends at the stadium. Lohri Celebrations at Shaheen Bagh: Anti-CAA Protesters Celebrate Punjabi Festival at Protest Site, Watch Video.

As per the latest report, some of the fans were seen standing at the stand and waving the Indian national flag. Combining the alphabets, it was read as, "No NRC, NPR & CAA". With dark coloured alphabet printed on white t-shirts, it was visible from a distance. They were later shunted out of the stadium by the security staff.

Here are some of the tweets and videos circulating on social media:

There were few supporters of CAA, NRC and NPR too. When these (protesters) people shouted slogans against the Union government, there were some who began cheering by chanting the name of PM Modi.

How to hurt these so called Anti CAA protesters 😂

Watch !! A group in Wankhede stadium was shouting ‘No CAA, no NRC’

It is to be known that the parliament passed the CAA last month and following this, protests erupted across the country against it.