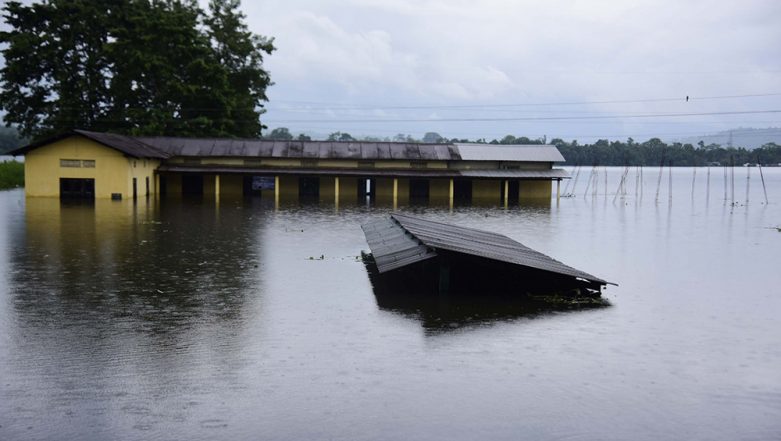 Guwahati, July 18: The flood situation in Assam remained grim even on Thursday with nearly 29 districts marooned by the deluge. So far, as many as 28 people have been killed and over 57 lakh people have been affected in the state. According to a tweet by ANI, approximately 57, 51,938 people in 4,626 villages in 29 districts have been affected due to flood till July 17. Moreover, nearly 427 numbers of relief camps are operational across the state. The National Disaster Response Force (NDRF) and the State Disaster Response Force (SDRF) are working round the clock in the flood affected areas and have evacuated 14,580 people to safer places. Assam Floods: Over 90% Kaziranga National Park Submerged With 17 Animals Dead; 32 Districts Affected.

Incessant rains across the state has cut road and rail links and forced evacuation of thousands of people from their inundated houses to safer areas. The floodwaters have submerged 90 per cent of the Kaziranga National Park. In the wake of the situation, the Assam government has imposed speed restrictions on a stretch of National Highway 37 and prohibitory orders to safeguard the animals in the area. Assam Floods: Situation Becomes Grim in 17 Districts; 6 People Lose Lives, 4 Lakh Displaced.

The Assam State Disaster Management Authority (ASDMA) bulletin on Wednesday stated that a rhino died in the Kaziranga National Park while the Brahmaputra and its tributaries are flowing above the danger mark in various places in the state, including in Guwahati. Brahmaputra River Flows Above Danger Mark, Roads Washed Away, School Building Collapses Due to Heavy Rains.

Flood-like situation also gripped Tripura and Mizoram where incessant rains have cut the two states off from the rest of the country. In the two states, over 22,000 people have been shifted to relief camps due to flooding of low-lying areas and villages by uninterrupted rains over the past three days.