India's Ministry of External Affairs confirmed that no Indian was killed in the blast that devastated the Lebanese capital of Beirut earlier this week. 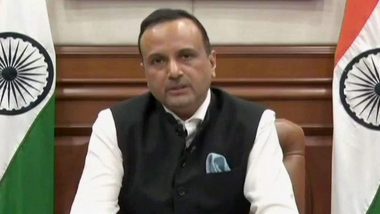 New Delhi, August 6: India's Ministry of External Affairs (MEA) on Thursday confirmed that no Indian was killed in the blast that devastated the Lebanese capital of Beirut earlier this week. Only five Indians received minor injuries in the explosion in Beirut, said MEA spokesperson Anurag Srivastava. A series of blasts rocked Beirut on Tuesday, leaving scores dead and around 5000 wounded. Lebanon Blast Caught on Camera: Terrifying Videos and Images of Explosion at Beirut Port Shared.

"There have been no reported casualties among Indians, only five minor injuries," Anurag Srivastava told during a briefing. Asked whether India is sending financial aid to Lebanon, Srivastava said: "We (India) have sought an assessment on damage from Lebanon. On its basis, we will decide the nature of assistance that we will extend to them." According to a report, the incident has caused damages worth $3 billion. Beirut Blasts: CBIC Directs Customs, Agencies to Check if Explosive Materials Are Kept Safely in Warehouses And Ports Across India.

Lebanese Prime Minister Hassan Diab had urged his country's allies to help Lebanon overcome the repercussions of the disastrous explosions. Yesterday, India's Prime Minister Narendra Modi expressed condolences to the families of people who lost their lives in the Beirut blast. "Shocked and saddened by the large explosion in Beirut city leading to loss of life and property. Our thoughts and prayers are with the bereaved families and the injured," PMO India tweeted.

A series of minor blasts followed by a powerful explosion occurred in the port area of Beirut on Tuesday evening. The city governor said half of the city's buildings were damaged, and hospitals were overcrowded due to a large number of those injured. The head of the country's general security service, Gen. Abbas Ibrahim, said that in line with preliminary data, explosives that had been stored in the port for a long time detonated.

(The above story first appeared on LatestLY on Aug 06, 2020 07:06 PM IST. For more news and updates on politics, world, sports, entertainment and lifestyle, log on to our website latestly.com).