Beirut Blasts: CBIC Directs Customs, Agencies to Check if Explosive Materials Are Kept Safely in Warehouses And Ports Across India

In the wake of massive explosions at the Beirut port, the government directed concerned authorities to check whether hazardous or explosive materials are kept safely. 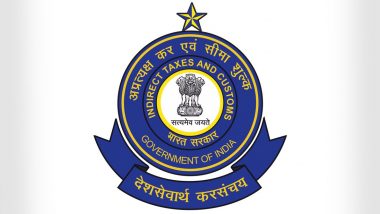 New Delhi, August 6: In the wake of massive explosions at a warehouse that devastated the Lebanese capital of Beirut earlier this week, the government on Thursday directed concerned authorities to check whether hazardous or explosive materials are kept safely in warehouses and ports across India. According to a statement by the Central Board of Indirect Taxes and Customs, the directions have been issued as a precautionary measure. Lebanon Blast Caught on Camera: Terrifying Videos and Images of Explosion at Beirut Port Shared.

"CBIC has urgently directed Customs and field formations to immediately verify and confirm within 48 hours that any hazardous and explosive material lying in warehouses and ports across the country meets all safety and fire standards and presents no danger to life and property," read the statement by the agency. A series of blasts rocked Beirut on Tuesday, leaving scores dead and around 4000 wounded. Beirut Blasts: PM Narendra Modi 'Shocked And Saddened' by Explosions That Killed Over 70 in Lebanese Capital.

CBIC Directs Customs, Agencies to Check if Explosive Materials Are Kept Safely in Warehouses And Ports:

"This precautionary step has been taken in view of the recent incident of an explosion in a foreign country caused by such material," the CBIC said. Lebanese Prime Minister Hassan Diab said that 2,750 tonnes of ammonium nitrate had exploded near the Beirut port. Lebanese President Michel Aoun had also tweeted that it was "unacceptable" that 2,750 tonnes of ammonium nitrate were stored unsafely.

(The above story first appeared on LatestLY on Aug 06, 2020 06:42 PM IST. For more news and updates on politics, world, sports, entertainment and lifestyle, log on to our website latestly.com).