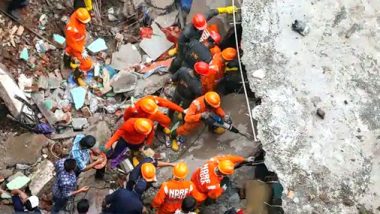 Mumbai, September 23: The death toll in the Bhiwandi building collapse which took place on Monday, rose to 39 on Wednesday, National Disaster Relief Force (NDRF) informed. The three-story building collapsed around 3:40 am on September 21 in the Patel compound area in Bhiwandi area of Thane district. As soon as the incident was reported, the National Disaster Response Force (NDRF), fire brigade, and police teams had reached the spot and carried out rescue operations.

The building, which is located at Narpoli's Patel Compound near Dhamankar Naka, collapsed while the residents were asleep. Reports inform that the building was not in the list of dilapidated structures of the Bhiwandi-Nizampur Municipal Corporation (BNMC). A resident of the building said most people residing in the building were tenants and included autorickshaw drivers, vendors and labourers. Locals informed that tonnes of concrete and metal collapsed in a heap of rubble with a loud sound. The incident also shook other buildings in the vicinity. Bhiwandi Building Collapse Tragedy: PM Narendra Modi Expresses Condolences to Families of Deceased.

#UPDATE Maharashtra: Death toll rises to 39 in the Bhiwandi building collapse incident in Thane. Rescue operation underway. 25 people have been rescued till now.

Bhiwandi Building Collapse; What we Know So Far:

Vijay Wadettiwar, Maharashtra rehabilitation minister, visited the collapse site on Tuesday and said the issue of unauthorised and dangerous buildings in Bhiwandi was a serious one and it will be discussed in the state cabinet. The minister said a decision would be taken about sanctioning of additional FSI and other measures for rehabilitation of affected people.

This is the second major building collapse in less than a month in the Mumbai Metropolitan Region (MMR). On August 24, an eight-year-old five-storey building - Tarique Gardens - had crashed in Mahad town of Raigad, killing 16 people.

(The above story first appeared on LatestLY on Sep 23, 2020 08:22 AM IST. For more news and updates on politics, world, sports, entertainment and lifestyle, log on to our website latestly.com).