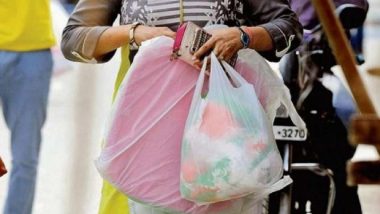 Chandigarh, October 19: The Chandigarh Consumer Forum has levied a penalty of Rs 23,000 on Big Bazaar, one of the largest retail store chain, for asking two of its customers to pay Rs 18 each for carry bags. Out of the said fine amount, Rs 1,500 each will be handed over to the complainants, whereas, Rs 20,000 will be deposited in the "Consumer Legal Aid Account", reports said.  No Nationwide Ban on Single-Use Plastic Yet, 'Swachhata Hi Seva' All About Making People Aware.

One of the complaints before the forum was filed by one Santosh Kumari of Sector 15 in Panchkula. She claimed that the cashier of Big Bazaar asked her to pay Rs 18 in addition to the bill for a cloth bag to carry the items. The complainant pointed out that the store had not informed in advance that it would be levying an unprecedented charge for giving a carry bag. Big Bazaar Was Similarly Fined in September as Well.

Another complainant, Baldev Raj, also noted in his complaint that he was charged Rs 18 for cloth bag by the retail shop on March 20. After adjudicating upon both the cases for the past few months, the Consumer Forum held Big Bazaar at fault and imposed a cumulative fine of Rs 23,000.

Earlier, on February 21, another Panchkula resident Saurav Kumar complained to the forum, claiming that he was also charged Rs 18 for a carry bag by Big Bazaar. The consumer body deliberated upon his complaint and issued an order on September 8, asking the retail giant to pay a fine of Rs 11,518 -- of which Rs 1,518 was to be handed over to the complainant, whereas, the remnant was to be deposited in the Consumer Legal Aid Account.

(The above story first appeared on LatestLY on Oct 19, 2019 08:43 PM IST. For more news and updates on politics, world, sports, entertainment and lifestyle, log on to our website latestly.com).