Tripura Police on Friday registered an FIR against Facebook user for allegedly spreading fake news of divorce rumours of Tripura Chief Minister Biplab Deb with his wife Niti. Niti has called this rumours fake and termed the post on social media a 'dirty rumour. 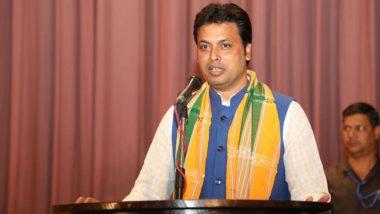 Following the reports, Niti took to Facebook and clarified that it was fake news and "cheap publicity" spread for political gains. She also appealed people to avoid rumours if they loved her and had faith in her. Terming herself, daughter-in-law, boudi (sister-in-law), mother and sister, Niti, in a Facebook post, claimed that the rumours were to tarnish her image.

"Rumors have no mouth, only dirty, filthy and sick minds generate for cheap publicity and mileage, and importantly when paid high for spreading such dirty Rumors to gain political advantage against influencial people...otherwise who will follow these culprits...", Niti said.

"Being female I may say if all of you really loves me and have faith on me kindly teach lesson to these kind of people by boycotting and least bothered abt there existence even...I'm boudi, daughter in law, mother, sister and wife of someone belong to our State,,they not just try to tarnish my image but disrespected the love,affection and respect given to me by people of Tripura," she added.

(The above story first appeared on LatestLY on Apr 26, 2019 07:34 PM IST. For more news and updates on politics, world, sports, entertainment and lifestyle, log on to our website latestly.com).