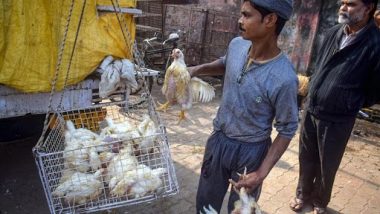 New Delhi, January 24: Bird flu or avian influenza cases have been confirmed in 13 states in India as on January 23. The Union Ministry of Fisheries, Animal Husbandry and Dairying on Saturday confirmed that of the 13 affected states so far, Avian Influenza has been reported in poultry birds from nine states while in wild birds from 12 states. The states where the bird flu has spread in poultry farms include Kerala, Haryana, Madhya Pradesh, Maharashtra, Chhattisgarh, Uttarakhand, Gujarat, Uttar Pradesh and Punjab for poultry birds. Bird Flu FAQs: Is it Safe to Eat Eggs & Chicken? Do Humans Get Infected With Avian Influenza? Here Are Answers to Your Doubts.

All states are reporting to the Department on a daily basis regarding the control measures adopted by them based on the Revised Action Plan for Prevention, Control and Containment of Avian Influenza 2021. On Saturday, a document issued by the Food Safety and Standards Authority of India (FSSAI) suggests that proper cooking inactivates the bird flu virus present inside meat and eggs. It said that proper cooking inactivates the virus present inside meat and eggs. "Poultry meat and eggs from the areas affected by the outbreak of bird flu should not be consumed raw or partially cooked. Properly prepared and cooked poultry meat and eggs are safe to eat", the FSSAI said.

(The above story first appeared on LatestLY on Jan 24, 2021 10:05 AM IST. For more news and updates on politics, world, sports, entertainment and lifestyle, log on to our website latestly.com).