Excerpts from the passage have gone viral on social media platforms with users calling out the board for supporting "misogynistic" and "regressive opinions" and the hashtag "#CBSEinsultswomen" trending on Twitter. 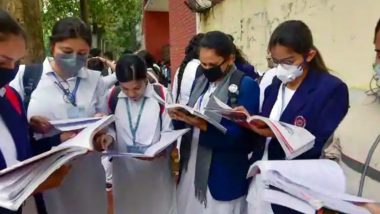 New Delhi, December 13: The CBSE on Monday dropped a comprehension passage and the accompanying questions from the Class-10 English exam and decided to award full marks for it to students, following an outrage over the board allegedly promoting "gender stereotyping" and supporting "regressive notions".

The Central Board of Secondary Education (SBSE) had referred the matter to subject experts on Sunday and sought their feedback. In the Class-10 exam conducted on Saturday, the question paper carried a comprehension passage with sentences such as emancipation of women destroyed the parents' authority over the children" and "it was only by accepting her husband's way that a mother could gain obedience over the younger ones", among others.

Excerpts from the passage have gone viral on social media platforms with users calling out the board for supporting "misogynistic" and "regressive opinions" and the hashtag "#CBSEinsultswomen" trending on Twitter. CBSE Question Paper Row: Board Drops Controversial Passage From Class 10 English Paper Amid Outrage.

"A passage in one set of English language and literature paper of CBSE Class-10 first-term examination held on December 11 is not in accordance with the guidelines of the board with regard to the setting of question papers. In this backdrop and on the basis of the feedback received from the stakeholders, the matter was referred to a committee of subject experts. According to its recommendation, it has been decided to drop the passage and the accompanying questions," CBSE Examination Controller Sanyam Bhardwaj said.

"Full marks will be awarded for this passage to all the students concerned. To ensure uniformity and parity, full marks will also be awarded to students for passage number one for all sets of the question paper," he added.