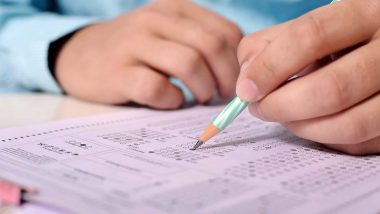 Jaipur, August 31: In the pre-Deled exam (Diploma in Elementary Education) conducted in Rajasthan on Monday, a Covid-19 positive girl student reached the examination centre at Dausa's Ramkaran Joshi Secondary School and took the test alone. The student was undergoing treatment at the Dausa hospital and had sought permission from the district administration to take the test. After receiving permission, she was given separate arrangements at the examination centre and was allowed to sit in the room alone. Three Rajasthan MLAs Test COVID-19 Positive, Says Ashok Gehlot.

During this time, an invigilator wearing a PPE kit was also posted in the student's room. The student was brought to the examination centre by an ambulance. Dausa DEO Ghanshyam Meena said the girl student expressed her wish to take the test. "As soon as she gave her consent for the test, the administration went on active mode to ensure that she takes the test without fail." Rajasthan: Over 5.84 Lakh Challans Issued for Violating COVID-19 Norms.

"Me along with the District Collector, the ADM and CMHO had a meeting to discuss the arrangements she should have been given. A separate room was given to her and was given a PPE kit as well to wear during the examination time. The medical team brought her in 108 ambulance to the exam centre. We arranged an invigilator to her room who was also given a PPE kit. Water and all other arrangements were made available in this room and social distancing norms were followed at length."

"The student was there for three hours and she completed her test and then her answer sheet was duly sanitised, dried and was packed in a paper bag which was sanitised again. The medical team along with eight officials were present at the exam centre till the time she was taking the test. Soon after the test, she was taken back to the hospital in the 108 ambulance," he said.

(The above story first appeared on LatestLY on Aug 31, 2020 11:28 PM IST. For more news and updates on politics, world, sports, entertainment and lifestyle, log on to our website latestly.com).