State Congress president Mullapally Ramachandran told the media that the control room is headed by former WHO expert S.S. Lal, who incidentally was the party candidate from the Kazhakootam in the April 6 Assembly elections. 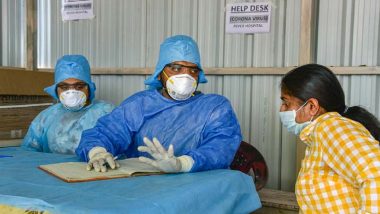 Thiruvananthapuram, April 19: With COVID-19 cases in Kerala spiking, the Congress on Monday decided to open a state-level control room in the party headquarters here, to address doubts of people among other objectives. State Congress president Mullapally Ramachandran told the media that the control room is headed by former WHO expert S.S. Lal, who incidentally was the party candidate from the Kazhakootam in the April 6 Assembly elections.

"The control room has a team of doctors and we have asked similar desks to be opened in all the 14 districts headquarters of the party," he said.

Ramachandran said the testing done in Kerala was less and the steps are taken both by the state and Centre failed to handle the pandemic. COVID-19 Surge in Kerala: Registering on E-Jagratha Portal, RT-PCR Test Mandatory for People Arriving in The State Without Getting Coronavirus Vaccine.

"Health experts for long has been demanding the state government to increase the number of tests to one lakh daily, but it was not done. And when it was increased in the past few days, the total number of positive cases jumped to 72,234 cases, which indicates a spread," he said.

The Congress leader also claimed that there appears to be a slackening down in the health care after the April 6 Assembly elections and that is one reason why the party decided to open such a control room. "This is just meant to provide help to people who might have doubts and this is not to counter the other health care set-up... instead we are just lending a helping hand," he added.

(The above story first appeared on LatestLY on Apr 19, 2021 07:25 PM IST. For more news and updates on politics, world, sports, entertainment and lifestyle, log on to our website latestly.com).